It seems like for a better part of my career, I have spent a fair bit of time staring straight down. It might surprise you that has been intentional, and that even more surprisingly, I expect that this perspective can open a new frontier. You see, for part of this cruise, that is exactly what we have all been doing: this team of scientists and engineers, looking at our feet with new a new vision as we combine sonar, lidar, and cameras to see with new eyes.

My name is Eric Martin, an Electrical Engineer working at the Monterey Bay Aquarium Research Institute. I have been working on Remotely Operated Vehicles (ROVs), Autonomous Underwater Vehicles (AUVs), and more for over 15 years, and in that time, I have been developing or using sensors that let us see the ocean with new vision. Sometimes the targets are compelling: an ancient shipwreck or a gushing hydrothermal vent. Sometimes they may seem mundane: a rock wall or a rolling seafloor. But they are all in some way interesting, you just have to understand how to look at them in the right way.

These ROV dives are using what we call our low-altitude survey system. I have been lucky to help assemble this payload to provide a new perspective. There are three primary sensors: the first is a familiar one, a pair of small cameras that are arranged in the same way as our eyes, providing stereo vision – a sense of space and depth. Thanks to geometry, we can use perspective from two simultaneously acquired cameras to calculate a shape. There are some subsea strobes that flash to help light the scene. The second sensor is our multibeam sonar, which collects ranges by emitting a sound, then timing its return along an array of sound, or pressure, sensitive elements. The final sensor is a lidar, a laser ranging sensor that also gets individual ranges as it sweeps back and forth. The lidar and sonar collect data along a line that runs from port to starboard (or left to right for you landlubbers). If we move the ROV in a forward direction at a steady speed, we can stack those observations in post-processing into a map.

At the end of the day (and thanks to many navigation tools) we produce a map that shows extremely high detail of the area that we flew around. Each sensor has a different resolution: the cameras are 5-millimeters, the sonar about 5-centimeters, and the lidar is near 1-centimeter between measurements. That lets us come close to counting polyps on corals or measuring the size of the opening on a vent. Keep in mind we are doing this over many hours, so these final maps are enormous in their overall scale.

Sitting in front of one of these massive surveys is akin to visiting a gigapixel image of the New York skyline – it is hard to even know where to start looking. That is why even though I can make and assemble these data, I need to work with a scientist to use them. They have the training to look at these data to identify new patterns, animals, and thrilling anomalies. As an engineer, what I have found most stimulating are the observations we make when we compare and contrast these data against one another. These systems operate on different physical principles, so each one sees the seafloor in a different way. For example, the sonar is blind to soft tissue organisms like sponges, seeing right through them. The lidar and cameras can not see around them at all, so if we do some simple subtraction, we have a new tool to detect and measure soft creatures, and on this trip, maybe bacterial pools as well. That is the hypothesis, at least.

This expedition is the culmination of many years of work to specify, assemble, develop, and refine these tools. I am thankful that we have the opportunity to come to Pescadero Basin and use them. But we are scientists and engineers, there is no time to sit on our laurels. For some of us, there is a mountain of data to process. For others, we look forward to how else we can improve or expand the capabilities of this system. Someday, we hope to put all of these sensors on an AUV and address the multitude of control problems faced to automate low-altitude surveys like these. For now, it is time to backup and carry home over 20 hard drives we have filled up since we got here. 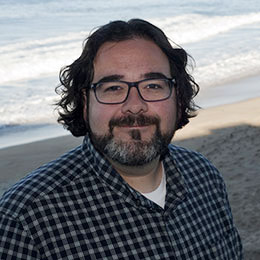