Days ago we boarded the RV Falkor in Cabo San Lucas, Mexico, bound for hydrothermal vents deep in the Gulf of California, at a place called Pescadero Basin. We are excited to join other scientists that have been on board for two weeks, mapping the seafloor and getting a much better understanding of the layout of this particular vent field.

Six members of the new science party are biologists interested in organisms ranging from the smallest bacteria, to three-centimeter long polychaete worms, to football-sized clams. These organisms call this ‘extreme’ habitat home and not only survive but thrive in conditions we would find most inhospitable. They are exposed to high temperatures, high pressures, and toxic chemicals – which also happen to be the life-giving force in these deep oases.

The base of the food chain is comprised of microbes (both bacteria and archaea), sometimes as food  (many animals we study forage on the lush bacterial mats) and sometimes as collaborators (many of the animals we find at vents maintain tight relationships with bacteria that provide them with nutrients). Even stranger, microbes collaborate with each other to perform seemingly impossible thermodynamic feats of metabolism to take advantage of niches not usually inhabited by others.

This particular vent field is unique. It is one of the deepest known vent fields, with chemical and geological features that combine to form a habitat that is so far known to be singular on Earth. A previous expedition in 2015 (which involved many of us currently on board) described the animal community associated with several vents in the area. However, very little is known about the microbiology – arguably the most important yet least understood aspect of any hydrothermal vent environment. We proposed to the Schmidt Ocean Institute to return to this fascinating vent field to combine a new, more precise understanding of the geology and chemistry of the area (completed by scientists on the first leg of the expedition), with a new examination of the underlying microbial communities (not yet studied), with more thorough examinations of the animal communities that rely on them for nutrition.

These goals are made even more exciting by the discovery of a new vent field to the south of us, which we plan to visit in a few days. Stay tuned! 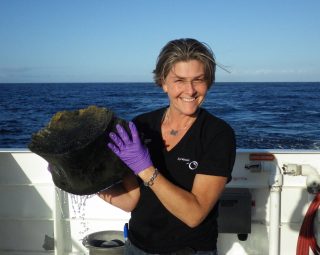