We have accurate maps of the moon, mars, and other planets – but we hardly know the layout beneath our own oceans. Creating maps of the seafloor allows us to understand better our planet and the life that inhabits these unexplored places. Currently underwater robots are used to accurately map the seafloor, but these kinds of systems are still very expensive to build and operate, limiting ocean exploration.

Building accurate maps (both for land and underwater) requires accurate sensors and precise knowledge of the sensor position: like making a puzzle, it is required to know exactly where to locate each piece. But measuring the robot’s position underwater is a challenging problem due to two main reasons: First, GPS (or a global position system) is not available underwater because of high attenuation of electromagnetic signals in water. Second, the navigation sensors currently used require large amounts of power,are expensive, and are relatively large.

Low-Cost Navigation
We currently use in our robots high precision attitude sensors based on fiber optic Gyroscopes and accelerometers, but as part of this expedition we are also working on low-cost inertial systems — the same that you might have in your mobile phone. These kind of sensors are less reliable and less accurate due to higher noise and changes in internal parameters requiring complex calibration procedures. But we are developing new algorithms to be used in underwater navigation, making them more reliable without human intervention and therefore enabling cheaper seafloor matting systems in the future. If we want to explore the ocean we need less expensive robots that can last longer, using less power.

One of my research goals for the current expedition was to mount a low cost inertial sensor with the system. In addition to high-accuracy high-precision inertial sensors (costing more than 100k USD), we have low-cost inertial sensors that cost 10- times less – letting us compare our algorithms and test new methods. We hope in the future to have cost effective underwater robots that allow us to explore the ocean and help us understand our own planet much better.

Temperature Anomalies and Vent Hunting!
I really enjoy being at sea and it is exciting because there are always opportunities for discovery. In 2015, I was part of the MBARI Gulf of California expedition when we found some unusual anomalies in the seafloor map. A number of mounds and spires rising up from the seafloor led us to believe that hydrothermal vents were in this area. We didn’t know if the were actually hydrothermal vents or if they were still active. Later, after processing the temperature logs from the vehicle and realizing that we were also getting temperatures anomalies, we were completely sure of the vents. Now we have used the same AUV to map the seafloor in the surrounding areas of the previously discovered field. Again we have found evidence of hydrothermal vents on the bathymetry and temperature anomalies, leading to the discovery of a new hydrothermal vent field in the area! 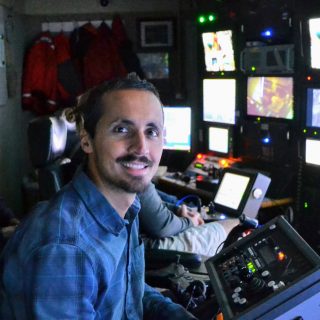