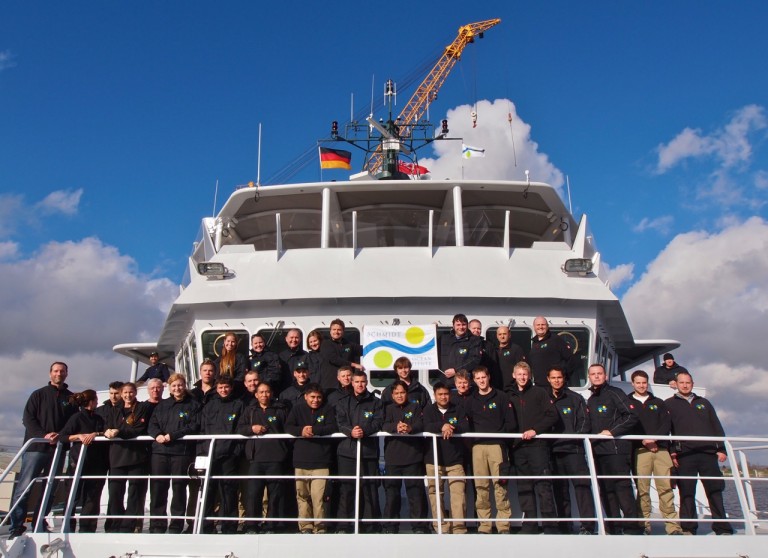 In short, yes you do!  The expedition thus far has been so much fun. Falkor is a marvelous ship that is both comfortable for living and beautifully well-equipped for science.

So now the question remains, how do you get onto a ship like Falkor? Well, you could go as a scientist, but they are not the only ones having fun. The crew on board Falkor all seem to love their jobs and you never see them without a smile.  I asked a few of crew on board about how they chose to work at sea.

Lars is the senior bosun on the Falkor in charge of all the deckhands.  He is from Germany where vocational school is a part of public education.  As a young man, he was required to be of service to his country so he joined the German Navy where he spent two years as an electrician.  After spending time as an electrician, Lars sold electrical supplies for eight years. Unfortunately, this put him behind a desk and he wanted back in the action. He first became the Bosun on a tall sailing ship, but after three years made his way onto Falkor. Lars has now spent the last seven years working at sea and you can feel his enthusiasm and experience. His recommendation for anyone aspiring to work on a ship is to attend a trade academy to learn a skill, and then apply for a job.

Deckhand Archel – Bringing instruments like landers on and off the ship

Archel is a deckhand and has been on the Falkor for only three months. You can tell that Archel is happy here, he just radiates happiness. He is from the Philippine Islands where he has a wife and three children.  After high school, Archel spent four years doing marine studies including on-the-job training.  He has worked on a wide variety of ships including container vessels shipping cargo from Europe to the United States, passenger ships, tugboats, and ro-ros (short for roll-on, roll-off vehicle transportation vessels). Archel takes every aspect of his job seriously and strives for perfection, always doing it with a big smile.

Mary Ann and Sheilla are the Falkor’s stewards.  They did not know one another before coming to work on Falkor but arrived from similar paths.  Both Mary Ann and Sheilla graduated from college with degrees in Hotel and Restaurant Management.  Both worked in five-star hotels, but wanted more excitement in their lives and to see the world.  Mary Ann worked on a yacht in the Mediterranean before joining the Falkor crew, where she now works with her husband Wendel who is a deckhand.  After leaving the hotels, Sheilla worked on a cruise ship and then a super yacht.  She loves to travel around the world and working on ships has made it possible.

Chef Carlos is from Southern Brazil where he studied business administration and once owned his own business.  He moved to London and later spent time in Barcelona, Marrakech, and Thailand.  Everywhere he went, Carlos took culinary classes.  He spent time as a chef on a super yacht and has been cooking on Falkor for four years.  You can tell by the magnificent meals produced that Chef Carols and Chef Arkadiusz both love their work.

Edwin is a fitter on the Falkor.  He makes everything from science instruments to ship parts fit and work. Edwin also does maintenance and repair, a never-ending job on a ship. After high school, Edwin studied engineering at a technical school.  He worked on tankers that transport liquids like oil for 10 years, and has been on the Falkor for the past three years.  If you talk to Edwin for just a minute, you will know he loves his work.

These are only just a few of the careers available at sea. On this ship alone, there are many other positions such as captain, officers, engineers, oilers, wipers, pursers, and marine technicians.  Now in my opinion, I think the marine technicians have the most fun of all, but I will save that for another story.