Ocean trenches, the most hidden habitat on Earth (6000-11,000m), account for the deepest 45% of the oceans.  This enigmatic environment is called the hadal zone and remains one of the least explored habitats on earth.  This isn’t for lack of interest.

Trenches form where one tectonic plate subducts underneath another one and the movement creates earthquakes and tsunamis.  Trenches may funnel detritus from the waters above and act to sequester carbon, affecting the carbon cycle and climate change.  Trenches, the deepest place on our planet, can provide clues to how life can adapt and thrive under conditions alien to us but perhaps similar to places on other worlds.

Challenges of the Deep

The very depths and pressure which make trenches so interesting also make them extremely difficult to sample.  Early sampling used simple gears such as trawl nets; at such great depths the wires often snapped under their own weight.  Sampling was sparse and opportunistic. Crushing pressures are also difficult for undersea vehicles. The underwater vehicle Trieste dove to the bottom of the Mariana Trench in 1960 but stayed for only ~20 minutes because the pilots heard a loud popping noise and thought it wise to head home.  James Cameron was the 3rd person to ever dive to the bottom of the trench in 2012, but due to several equipment related issues only stayed for a short amount of time too.  Remotely operated vehicles such as Japan’s Kaiko and USA’s Nereus have recovered some sediments, animals, and microbes, but both vehicles now lie in rest on the hadal seafloor. Nereus imploded under the crushing pressures 10,000m of water in the Kermadec Trench, further illustrating that the trenches are one of the most difficult places in the world to work.

On our cruise we will sample the trench environment in a more systematic way than has been done before.  This will allow us to describe how hadal communities change with depth (and pressure), food supply, and physiological adaptations.  We will also sample rocks and mud to help understand the geology, earthquake activity, and tsunami formation of the trench.  To collect our samples, we are using five landers that will be deployed over the side of Falkor to sink untethered to the seafloor, conduct their sampling, and then return when we send an acoustic command for the lander to drop its anchor weights.  The landers don’t require cables that can break and don’t have the extreme cost of submersibles or ROVs. Two of these landers are brand new, recently built by Schmidt Ocean Instiutte and will be deployed for the first time.

The landers are designed to sample in several different ways. Two of the landers have baited cameras attached that will attract the mobile animals of the trench, so that we can determine who lives there, their relative abundance, and learn something about their behavior. Another lander is a baited trap (think lobster pot designed to withstand the crushing pressure).  This will allow us to confirm species identifications made with the cameras, describe new species, and perform genetic and physiological measurements. The fourth lander has steel grabs to sample rocks and the fifth has four large tubes, or cores, that push into the mud after reaching the seafloor. Each core measures respiration to tell us how active the mud community (microbes to worms) really is.  It also brings the cores to the surface where we can collect the worms, other animals and microbes.  All of these landers will be used every 1,000 meters from 5,000 m, at top of the trench, to the bottom of the Sirena Deep at nearly 11,000 m.

On our 30 day expedition, we hope to sample the trench from top to bottom and learn a great deal about the biology and geology of the world’s deepest habitat, the last frontier on our planet. For more information on hadal biology see the HADAL Ecosystem Studies website. 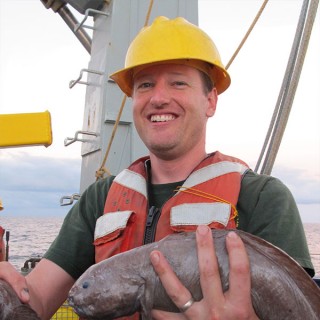