The Rock Grabber had mud and water samples for studies on geology, microbes, nutrient cycling, and so on. The Wee Trap had another grabber with mud, and baited traps with animals. The hadal lander had traps with animals, and its camera revealed swarms of them over a muddy bottom.

What animals, you ask? If you’ve been reading these blogs, you might have guessed: amphipods!

Let’s back up. In my previous blog, I described a curious pattern: there is no solid evidence of any fish living below 8400 m anywhere. I’ve hypothesized that this involves trimethylamine oxide (TMAO)—the source of “fishy” odor—which protects cellular proteins from distortion by high pressure. As fish go deeper, they need more TMAO, and we have evidence from Kermadec Trench snailfish and functions of fish kidneys that fish probably cannot accumulate enough TMAO to go deeper. We call TMAO a “piezolyte,” a molecule for pressure adaptation.

This brings us to snailfishes. In several other trenches, these are the deepest fishes, as you may have read in a previous blog—the transparent little pink fish that loves to eat amphipods, which abound in trenches. We have now discovered the Mariana Trench also has snailfish, in high densities at 7000 to 7500 m, and filmed down to 8075 m. However there are very few there, and we have seen no fish at deeper sites. Mariana snailfish (so far) fit our hypothesis: they seem unable to enter the greatest depths, despite the wealth of prey there.

Now consider those prey. Amphipods thrive below 8000 m, perhaps because there are no fish eating them. There are scavenger species that eat organic material from above, and predatory species that eat the scavengers. That’s not all; we know from earlier expeditions using nets or submersibles that a few other animal types are there, including sea pigs (an echinoderm) and various worms, which our traps do not catch. There are many non-animal organisms such as bacteria and foraminifera, but why do these organisms thrive where fish dare not go?

At the moment, we can’t say. If pressure is the key, perhaps these organisms have been evolving longer than fish and have more pressure-resistant proteins. There are hints. Scientists in Japan reported that a hadal Mariana amphipod has an enzyme that digests wood! Moreover, this enzyme (unlike many fish proteins) works better under pressure than it does at low pressure.

Might amphipods also have better piezolytes? In amphipods collected from various depths on other expeditions, we found that the deepest species have high TMAO like snailfish. But they are also high in other interesting molecules including glycerophosphorylcholine (GPC) and scyllo-inositol. Both are protective agents. GPC occurs at high levels in mammalian kidneys, where it protects your proteins from harmful effects of waste products. Scyllo-inositol is being tested to restore mis-folded brain proteins associated with Alzheimer’s Disease. Do these also protect proteins at high pressure? We plan to address this question using the Mariana amphipods that we have now collected.

Like many biologists, I am drawn to study life in extreme habitats because each discovery leaves me in awe. Each also gives us fundamental insights into the nature of life and evolution, not only differences but also the ties that bind all life together. Who would have guessed that the two places we find GPC at highest levels are your kidneys and the cells of hadal amphipods?

A final thought: perhaps I’m wrong. In another trench, maybe there is a fish that disproves my proposed depth limit. That would be fine with me, there would be yet another amazing animal to study! 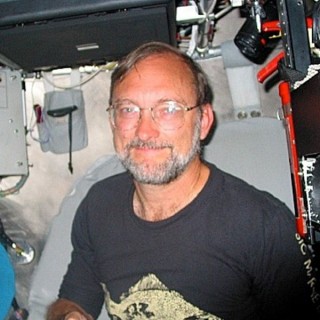