Did you miss us?

Yesterday was a very cool day.  I woke up at 4am to the sound of the ship slowing to a halt with 2 hours to spare at the point where we were due to pick up the pilot who would bring us in to port in Jamaica.  And then I woke up again at 6:30 to the sound of us pulling alongside and lines being thrown ashore from right outside my cabin.  I logged the formal end of Leg 1 on my iPad and looked out to a view of bouganivilleas with verdant hillside as a backdrop.  Very nice ☺

By 11am I was feeling very smug: thanks to the labors of others plus the cut and paste function on my laptop I had just about the whole of the cruise report for Leg 1 of the voyage knocked into shape.  And not a moment too soon because first I heard the dulcet tones of Andy Bowen percolating down the corridor from the Ship’s Office: he together with the rest of our new Leg 2 Nereus team had arrived – Jon, Chris and Cliff were all present and correct: always a good start. 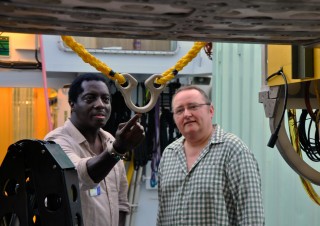 Then, trundling across the quayside from the dock gates, came the new members of our Science party: Cindy, Jeff and Julies (1 & deux).  Most of the rest of the day was spent corralling data from Leg 1 and getting things into shape but at the end of the afternoon we were delighted to welcome two guests aboard ship from here in Jamaica: Sandra Kennedy who grew up in SE England very close to where I come from and where Andy B was born, and Bryan McFarlane who was born in Jamaica but is now based in Boston’s Jamaica Plain from where he has been collaborating with our graduate student Jill McDermott for about a year.

I first met Bryan at the Synergy exhibit that was put on at the Museum of Science in Boston earlier this year where I was blown away by one of his paintings, in particular, that had been inspired – in turn – by our discoveries of the Mid Cayman Rise.  Now I really believe that what I do for a living is cool ☺

You can learn more about Bryan & Jill’s collaboration here, but I’m afraid we went one step further.  After Bryan and Sandra joined us for a Barbecue Dinner that Captain Heiko generously threw to both welcome new cruise participants and say thank you and goodbye to departing colleagues. We then adjourned to the Montego Bay Yacht Club where Max and I were introduced to the delights of Rum & Ting with lime and then, in a moment of weakness, we persuaded Bryan to come back and visit us again the next day. He gave us a “bonus” Seminar at Sea on his interests and motivations in exchange for a further tour of the ship and laboratories that we have on Falkor for our research.  We’re hoping this will help inspire Bryan onto yet more projects linked to the oceans and who knows, maybe the day will come when SOI will sponsor artist-led studies of the deep ocean.

As Bryan put it rather eloquently: although much of the ocean is unknown, in his mind’s eye he can already project forward/downward to visualize what he thinks is down there.  Which, now I think about it, isn’t really that far from what we do when making our deep ocean exploration plans.  Life imitates art, indeed, but you have to savor the moments when it gets as cool as Bryan’s paintings!