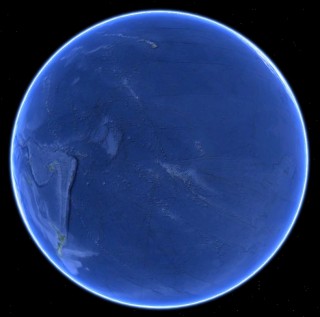 If you are reading this on the day it is posted, then know this:

What’s so special about the Oceans, you may ask?
[Great thing rhetoric, we can make you ask just the questions we wanted to answer].

For a long time we have been watching you from afar.
Here is our view of your planet from space.
Half your planet is here.

You may just notice what you call New Zealand near the bottom left and you may just be able to see Baja California in the upper right.  Other than that, you would have to really squint to see dry land (e.g. in Hawaii and Tahiti).

Perhaps, from this perspective, you can understand an important truth.

More than half of your planet is covered in deep oceans more than 3000m deep (that’s about 2 miles for those of you who don’t know about meters or metres).

On your planet, land is not normal.

This may be news to you.

We blame your air-breathers’ propaganda.

For example, compare our image, posted here, with the one that accompanies the article on the Pacific Ocean on your truth documents that you call Wicked Media [Babel-fish Error, correcting…] Wikipedia.

In that image, more than half the world is scrunched into a space the same size as our view of Earth from space but now the ocean is rendered much smaller so that you can see more land around the outside.

This may explain why so few of you pay attention to such an important part of the Earth, the Oceans, which form the largest contiguous [Babel-fish Error, correcting…] …. the largest joined-up habitat for life that you have.

Look at the Wicked Media image.  See the Earth scrunched up and deformed so you can see the North and South Poles at once.  What have they done to your planet?  Why have you not complained?

We came here this weekend to visit our friends the Dolphins.  [We know Memorial Day marks the start of travel for many of you but it is two hyper-velocity weeks from Alpha Centauri on our new eco-friendly hybrid rocket ship].
We digress.

We are not here to laud our own environmental credentials.
We come only to belittle yours.

Our common ancestor Douglas Adams warned us that the Dolphins might finally be ready to come away with us by now.  Something about fish?

But they say no – it’s cool.  They think some of you air-breathers might finally get it.  They have played us some of your transmissions that say:

We need to care about our oceans.

We need to understand our oceans.

And if we don’t understand our planet, how can we understand what impact humanity is having on the Earth?

Some of you consider the people who say such things to be hippies.
Some of them are.
That doesn’t mean they are not right.
That does not mean they are.
But they make some good points.

Over the past 24 hours, we have been studying the entire crew and science party of Falkor in particular, very closely.  They only noticed that their internet went down.

Silly humans.
Everyone on the ship already recognized that Jeremy who handles their electrickery was a higher life form.
They just didn’t realize he was working for us.

We have decided that they are pretty cool.
We will let them continue their work.
We will leave both them and the Dolphins to live here among you.
For now.

We think we have got our message across pretty effectively.
We shall go chill with the Dolphins for the rest of the day then head out.

Oh before we go, the Falkor’s Chief Scientist, Chris German wants to read us a stanza of some ancient text he wanted us to hear to prove humanity gets it:-

Wait one – he picked up the wrong book!

“He who loves the World as the Self is able to nurture the World.”

PS. We just did the flashy thing on the Falkor folks so they won’t remember a thing.  We can all laugh together tomorrow when they start blogging again about how their research is also relevant to whether there might be life elsewhere in the Universe.

PPS. But we didn’t do the flashy thing on Jeremy – he’s in on the joke!