Hello there.  Did you miss me?  I’m afraid I have been feeling rather disoriented.

Last night (or was it the night before) I was having a weird dream – I had got up in the middle of the night for a Nereus launch but then the dive went wrong and the vehicle had to come up early and then when we went to launch the ship’s small boat we found we couldn’t get it in the water and then when we decided to do a normal recovery we found there was a different problem with Nereus and then there was a lightning storm and everything was turning into this very horrible nightmare where all I could think was “There’s no place like home, there’s no place like home” and suddenly there was a funny flash and I was sitting here in my cabin and Jeremy was there saying – is it OK if I come in and fix your TV, so you can watch the Grand Prix?

Wait, I thought – is it Sunday already?  Have I lost track of a whole day?  A week?  Have I missed Father’s day?  Did Kimi Raikonnen win again?  So many questions…

Another thought – the oceans around here are really blue but that means there isn’t much of a food chain going on.  I’ve seen Janet the non-gender-specific Gannet again but still no sign of any dolphins.  Wonder where they are this weekend?

Meantime, what have we been up to? 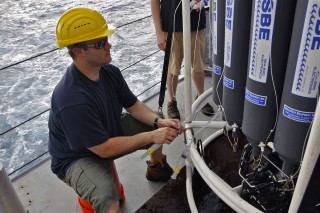 Well, mostly we have been finishing up our CTD based explorations, hustling the ship all over the place around the Southern end of the Cayman Rise and getting that done as fast as we can so we can head back to the Von Damm and Piccard sites and also, hopefully, conduct some exploration for more low-temperature fluid flow on the same “hill-top” as the Von Damm site.   At the Southern MCR we have ended up on the trail of methane signals without associated particles or Eh signatures – something that Ko-ichi and I were also chasing on the Chile Triple Junction in the SE Pacific this time last year with different colleagues including Donna Blackman at Scripps, Marv Lilley from U.Washington and John Lupton from NOAA’s Pacific Marine Environmental Lab.

Over the past few days, just as on that last trip I took to exploreuncharted oceans we were able to use CTD sampling and shipboard methane analyses to narrow the source of venting down to within about 1km but, because it wasn’t the kind of system that yielded in situ signals on our electrical sensors, there was little that our AUV could be used to do (on the Chile cruise with Sentry, or on this cruise with Nereus), to track the site down any closer.  Confounding.

So tonight we are calling that stage of the exploration quits.  Our last act was to go back to where we have seen the highest methane analyses and sampled for all kinds of tracers to characterize the plume – helium isotopes, methane, microbial cell counts and trace metal analyses.  We’ll be taking all those different sample types home with us at the end of the cruise and the analyses that will be done all across the US when we get the samples back to our labs are what we’ll need to use, just like we are doing for the Chile Triple Junction project, to close out that part of our study.

Meantime, tonight, we are heading north, mapping as we go, to the Von Damm site ready for an AUV dive at 4am tomorrow.