When phytoplankton (the single cell plants that live in the ocean) perform photosynthesis, they take up CO₂ from the atmosphere and convert it to organic carbon that becomes food for other organisms and put out O₂. When the carbon “fixed” by phytoplankton ultimately sinks to the bottom of the ocean, it can be considered removed from the atmosphere. Thus, phytoplankton are vital to making this planet habitable by regulating climate, as well as forming the base of the marine food web. But phytoplankton need nutrients to grow and nitrogenous nutrients are scarce in the sunlight waters of the open ocean, thus controlling the growth of phytoplankton.

Visible From Space
Trichodesmium is a phytoplankton that can also take up nitrogen gas to make nitrogenous nutrients to fuel its growth and subsequently this organic form of nitrogen is then available to other phytoplankton for their growth. It is commonly found in warm tropical waters around the world. Because this organism plays a key role in supplying a limiting nutrient and drawing down CO₂, we can say that Trichodesmium is a globally relevant and biogeochemically important organism that plays a significant role in regulating climate.

Trichodesmium has other unique properties that set it apart from other phytoplankton – it is a colonial, filamentous cyanobacteria: i.e. it is found in filaments of about 200 cells, and often these filaments clump together to form colonies that are the size of an eyelash and visible to the naked eye. It has gas vacuoles within it that allow it to controls its buoyancy and move up and down in the water column. It has a pigment – phycoerythrin – common to many cyanobacteria that give it a reddish color. Under certain calm conditions, these colonies accumulate by the millions into slicks that discolor the surface of the ocean. Sailors used to call Trichodesmium “sea sawdust” because of their appearance and the slicks can cover 10s of thousands of square kilometers – large enough to be seen by satellite from space. Captain James Cook and his naturalist Joseph Banks described extensive blooms of this organism off the Great Barrier Reef, and his sailors were afraid they were going to run aground when they ran into dense blooms of Trichodesmium.

An Enigmatic Organism
Over the last 40 years there has been concentrated effort to study and understand this organism, however it still remains an enigma. While we know that it produces its own nitrogenous nutrient, it still requires phosphorus and iron to grow and is not found where these elements are scarce in the surface waters. But we still do not know why it blooms where it does, or why blooms die when they do. The Trichodesmium colony can be thought of as a loose confederation of friends and associates, some of whom might have some sort of symbiotic relationship with Trichodesmium. For example, it has been recently suggested that some of the bacteria associated with Trichodesmium help it digest iron that would be otherwise unavailable to it. It has also been suggested that by regulating its buoyancy, Trichodesmium can “mine” phosphorus from deeper depths – i.e. it can dive down to 150m or more where there is little light – but where phosphorus is more available – and then float back up to the surface where there is light for photosynthesis. Trichodesmium is toxic and is not eaten by many other organisms.

While we know that viruses probably play a role in disrupting the blooms, there is still much to be learned about why and when viral attacks happen. All in all, Trichodesmium is my favorite charismatic microfauna! 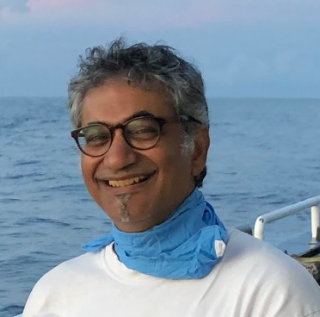