The sea-surface microlayer (SML) is the boundary interface between the atmosphere and ocean, covering about 70% of the Earth’s surface. Gases, heat, and particles entering (or leaving) the ocean need to pass the microlayer. Its thickness is equivalent to a human hair, but can grow to a thicker biofilm in the presence of surface-blooming cyanobacteria.

Collecting samples from the microlayer needs to occur away from a ship, which destroys its integrity. Getting far enough away to gather samples – without disrupting the thin layer – is a major challenge. In response to this, we have developed a radio-controlled catamaran with several rotating glass disks mounted between the hulls. The disks are partly immersed in the water: rotating through the sea-surface and collecting the microlayer under capillary forces. The adhering water is scraped off by a set of wipers, then pumped through onboard sensors, and finally collected in a bottle carrousel for further analysis in laboratories. The catamaran also takes several measurements in the upper two meters of the ocean (including on the partial pressure of CO2 and pH), working in tangent with a second piece of equipment: Sniffle. Sniffle is a free-drifting buoy that measures how much CO2 enters or leaves the ocean. With this setup, we are finally able to closely monitor the exchange of CO2 between the ocean and atmosphere, as well as how the microlayer and CO2 gradients in the upper ocean layer affect the exchange.

Before launching the catamaran, preparation takes about 2 hours in the morning, including installation of charged batteries and sensor packages, calibrations of sensors, and finally a safety checklist to make sure everything is functioning. After deployment from the ship’s crane, the catamaran is navigated in the proximity of other buoys making flux measurements. After 3 hours, a team on the small boat exchanges the battery of the electric outboard motor to complete the measurements throughout the afternoon. After recovery, the catamaran gets a good rinse with fresh water, after which the data download from the sensors can begin.

With in situ observations such as these, including those from our AirESea expedition on the Falkor back in October 2016, we have tuned mathematical equations to calculate CO2 fluxes between the ocean and atmosphere, and hence improving estimates how much CO2 the ocean takes up on a global scale (this work is published in the journal Geosciences). However, slick conditions (a sea surface phenomenon of damped capillary waves), have a huge impact on this. In 2016, we also found that slicks not originating from cyanobacteria blooms can reduce the CO2 flux by 19%, taking an estimate from the literature that 10% of the open ocean is covered with slicks. However, a single observation in cyanobacteria slicks forced us to ask many questions regarding the extent to which photosynthetic bacteria at the surface modify the CO2 exchange. We hope to answer the question with the explicit search of blooms during the current expedition. Back in 2016, we also observed that the cyanobacteria slicks modify the evaporation of water – in other words, the freshwater cycle. These thicker biofilm slicks seem to act as a barrier for evaporation, and we observed both a warmer surface and a fresher microlayer in these slicks. This is because evaporative cooling was reduced, and as less water escaped the ocean, the typically more saline microlayer disappeared in the slicks. This work has been published in the Journal of Geophysical Research Oceans and Geophysical Research Letters. Our aim for the current expedition is to provide new knowledge on near-surface CO2 gradients to mechanistically understand CO2 exchange and to answer the question how cyanobacteria slicks can modify CO2 flux. 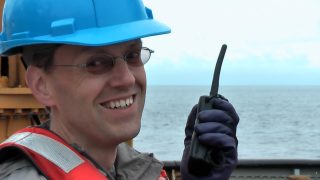