My name is Chloe, and I am an honours student at the University of Western Australia and a research associate at the Western Australian Museum. I am completing a marine science-focused honours degree, specifically looking at the phylogenetics of Pterasteridae, a family of sea stars. Pterasteridae have an inflated appearance, like a cushion star and a prominent osculum, or a hole in the centre of the animal, from which they expel mucus.

As part of my project, I will be analysing the DNA of many species within Pterasteridae and generating the first robust phylogeny of the family to find out how closely related genera and species within the family are to one another. I will also be identifying over fifty specimens currently held at the museum to the species level and sequencing multiple genes for each species.

As a research assistant on the R/V Falkor, I spend my days tracking specimen collections on Sealog. Sealog is a program designed to help us create a database of information from dives with the ROV. As we move along the seafloor, Sealog takes photographs in 5-second intervals and records vital information for each photo such as coordinates, depth, time, etc. Sealog also allows me to record information about any specimens we find that we’d like to collect. I can record what a specimen looks like in situ, what time we found it, and where it is positioned in the ROV SuBastian’s quivers and bio boxes, so I can keep track and collect the samples efficiently.

Once we have finished collecting samples for the day, the ROV surfaces. We then fill buckets with seawater, collect the specimens and bring them back to the lab to be photographed, subsampled, and preserved. My primary role in the laboratory is to keep track of the specimens (and sometimes the team). I am in charge of:

This process allows the specimens and their corresponding tissue samples to be easily searched for in the WA museum database and located within their massive collection. Once added to the database, the specimens we are collecting on this trip can be loaned by scientists working on various projects for years to come.

My honours project is invertebrate taxonomy focussed, so Nerida and Corey Whisson, another scientist from WAM, often teach me new things about the invertebrates we are preserving and then give me pop quizzes while we work. So far, Nerida has taught me how to subsample a seastar, and Corey has shown me how to fix a specimen in ethanol. This one-on-one style of teaching from experts in their fields, and hands-on experience out in the field, is a rare opportunity that I am very fortunate to have. The skills and knowledge I am gaining are vital for my research project and my future career as a marine scientist.

So far, what we have seen on this trip has challenged the assumptions I held previously about the mesophotic zone. I expected to see a reduction in species abundance as we moved from 50 to 150 meters deep, as we typically see a higher quantity of species in shallow depths where light can easily be absorbed. As we go deeper, the number of species that can function on the amount of light that reaches these areas reduces until you reach the deep sea, which is full of highly specialised species that do not need sunlight to survive.

At Ashmore Reef, we have seen a high variation in abundance at various depths. At location one, dive 405, we saw barely anything at 50 meters and high abundance at 150 meters. This was the opposite of today’s dive, 410, where we saw an extremely high abundance, particularly of corals, at 150m compared to sparser areas of biodiversity on yesterday’s dive, 409, at 150 and 100 meters in the same location. Species abundance appears to be related more closely to the substrate in locations around the reef, with higher abundance found on the limestone substrate than sandy areas. This shows how important it is to explore the mesophotic zone to understand the biodiversity of this understudied ecosystem.

Having women like Nerida Wilson and Karen Miller, our chief scientist, leading this cruise has been such a valuable experience for me. This cruise has allowed me to learn about countless species that we have come across with ROV SuBastian that I never knew existed from experts, Karen being an expert on coral reefs and Nerida on marine invertebrates. As a woman in science myself, I know first-hand that science is still a predominantly male-dominated field, and so having two women to watch and learn from has been both exciting and encouraging. Nerida and Karen have quickly become role models to me, and having the chance to learn from them and work alongside them makes me feel confident in my choice to pursue a career in marine science.

Before this trip, my passions were sharks and the deep sea. To my surprise, early into this trip we came close to both, taking the ROV down to almost 200 metres and encountering a couple of white tip sharks. This opportunity has convinced me that I am on the right path towards an exciting and rewarding career. I cannot be more thankful to the Schmidt Ocean Institute, the University of Western Australia, the Western Australian Museum, and particularly Nerida for this incredible opportunity. I cannot wait to see what the rest of the trip has in store for us. 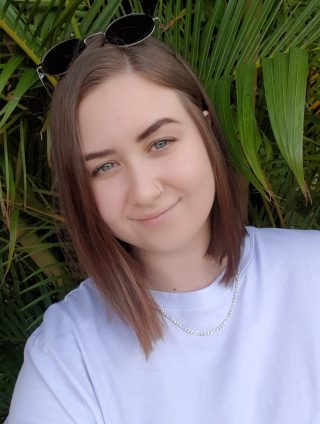