The expedition began with a two-day transit from Darwin to Ashmore Reef, slowly mapping the ocean floor with its rises and falls. During this time, I experienced just how infinite the ocean is, overwhelming in its magnitude. The unveiling of these unknown reef systems ignited such curiosity, and I was ready to be immersed in this new place. This is also the first time that I have worked as a part of a scientific team.

I began my process by getting to know the crew and the researchers and journaling about what questions I want to ask with my artworks.  One question I explored on this trip was: Why is it important to understand what is below the surface of these oceans?

One of the key outcomes of this trip was collecting images and samples of the biodiversity at seven different locations on Ashmore Reef. Shallow reef systems and corals have been victims of the rising sea temperatures caused by climate change. These temperatures are one of the leading causes of coral bleaching events causing irreparable harm across reef systems such as the Great Barrier Reef. Mesophotic reef systems exist 30-150 m beneath the water’s surface, where the water is cooler. This means that they are not yet at risk from the warming sea temperatures of climate change. It has been fascinating to learn from scientists about the importance of expanding our knowledge of what exists in these systems and how they can teach us about coral population diversity and other marine life so that we can better protect these spaces.

I needed to establish a personal connection with my subject. Tangibly, this meant that I was joining in on the sea logging activities, which involved; scanning the reefs for corals and interesting sea creatures, logging what we collected, taking images of stunning reef formations, and asking questions about the sea life that we were discovering. I began inquiring about how to interpret the discoveries and most effectively share the story of this landscape to engage audiences.

While in residence, I have been taken in two directions: First, a series of collage-style paintings inspired by the diversity and visual beauty of these reefs, and second, using the technology on board Falkor to create a ceramic vessel mould using digital imaging of certain coral formations on these reefs.

Art Inspired by Science
My artwork process often explores the role of the imagination as a connection to the visualisation of spaces or experiences. I contemplated how to effectively interpret these places in a meaningful way. The access to new technology and the overwhelmingly fascinating, absurd, vivid, living, and engaging imagery of these reefs fed my imagination and opened so many possibilities. I was immediately drawn to painting the landscape as a character, capturing its personality and diversity. I captured these thriving ecosystems with vibrant sketches with pencils, chalk pastels, and paints.

Research, Digital Imaging, and Art
During our daily transects of reefs, SuBastian, our wandering ROV, passed collectives of giant sponge vessels. These places excited me and the team on board. The sponges were giants, seemingly ancient relics of a forgotten civilization that we had just happened upon. Working alongside Iain Parnum from the Western Australia Museum and Jason Rodriguez, one of the ROV technicians, we used digital imaging to capture the visual characteristics of one of the sea sponges to create a slip casting mould to create a vessel–a teacup, a vase, something textural that you can cup your hands around to feel close to this place.

We are still working through the process, but so far it looks a bit like this:

Collaborating with some of the crew and using the technology available on Falkor has been a really important process for me. My practice is very manual–I make most things with my hands, and at times this limits me as I often have a lot of ideas that I am not always able to achieve. Being able to join together with the crew and researchers, and use our collective skills and ideas has been very exciting for all of us. 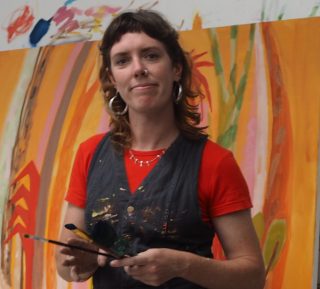