Hello! I want to share part of my experience aboard the Falkor. It is not only my first time on this ship, but also my first time aboard a research vessel at all. Together with Dr. Jorge Cortés and Dr. Odalisca Breedy, I am part of the team of the Center for Research in Marine Sciences and Limnology (CIMAR) of the University of Costa Rica that is participating in this expedition. I have had the pleasure of taking a look at the depths of my country, a dream come true for anyone who loves aquatic environments, science, and exploration of the unknown.

As I write this blog, ROV SuBastian is below us, exploring the Costa Rican Pacific at 1070 m depth, documenting aspects I have read about in scientific articles, as well as places that never been observed. In this expedition I have collaborated with some of the most recognized scientists in the study of deep waters. Thanks to them (and to SuBastian), I have been able to take in a great deal of information about these environments, not only with raw scientific data but with images and videos that (even if there was no science involved) render me speechless. The access to technology and facilities for research that on the Falkor is a benefit that young Latin American researchers rarely have access to directly from our universities. An expedition like this is something I used to joke about with my classmates when we were students: I feel very privileged to have this experience.

More Water than Land
Whenever I am at sea, I usually ask myself how Costa Ricans perceive the sea. I know that many think of it as something distant that probably does not affect their lives, and therefore it really has taken us some time to understand that our country is more water than land. I grew up on land, surrounded by coffee plantations, and I definitely had no idea what the sea was like. It was enough to dip my head under water once to start, without knowing it at the beginning, a path that would guide me and carry me, like a river, towards the sea. The question I ask myself about how we perceive the sea becomes more complicated when I add: How do Costa Ricans see our depths?

Deep Waters
During the past few years my interest in deep waters has been increasing. We have better maps of the moon than of the ocean floor. Last year I watched a virtual chat by Dr. Lisa Levin, one of the Principal Investigators in this expedition. She showed a map of a region of the Pacific seabed, distributed meticulously among many countries for mining activities. I thought: “This interest in deepwater exploitation will never happen in Costa Rica.” So I was incredibly surprised when, two months ago, I read a bill to conduct oil exploration in our country, which in order to be fulfilled needs the approval of the country’s electoral population through a referendum. If today they held this referendum on exploration for the purpose of exploiting our deep waters, what would most of the Costa Rican people think? Would we change these environments for money just because we can not see them or be there?

As a country, we do not have a perception of the importance of deep environments in the maintenance of biodiversity and in the nutrient cycles of the planet, both of which are involved in the global change that is already occurring. I hope that the images that are being generated on this expedition will have a high impact on all Costa Ricans. I have seen thousands of cutlass fish swimming together, crabs dancing to feed, sharks prowling patches of mussels, gigantic areas covered by colored bacteria; shrimp, snails, worms, stars and sea cucumbers, animals of a single cell the size of my fist…

I fell in love with the deep sea, and with these images I am sure that any Costa Rican can do so too – the pictures can make us stop thinking about the deep sea as an empty place. It is the opposite, it is an environment full of life. That is why I am extremely happy to be part of an interdisciplinary team aboard the Falkor, which seeks to better understand these environments with the hope that this information will not only serve the scientific objectives of the expedition, but also will have an impact on conservation efforts and generate awareness about the vulnerability and importance of the ecosystem services that the deep sea provides for us. 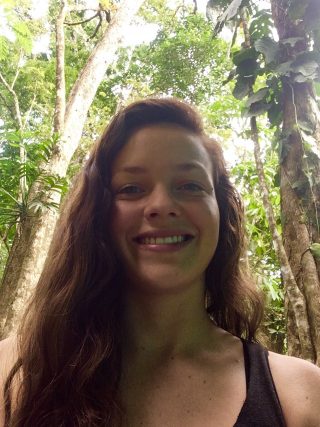