Discovering a ‘new’ species is a thrill and a privilege. The realization comes with a jolt of excitement: you may be the first person on Earth ever to set eyes on this creature! Many people never get to experience this rush; most biologists will never even describe a new species. Us deep-sea biologists are a lucky bunch though. The deep sea habitat covers about 90% of Earth’s seafloor. This vast area houses a myriad of different types of organisms. However, the difficulties of exploring this dark, cold, high pressure, and often remote environment mean that many of these organisms are still waiting to be discovered.

Even as a deep-sea biologist myself, I have been surprised by the amazing variety of species that we have recorded so far during this research cruise off Costa Rica, and amazed by how many of these species are new to science. It seems that every day we scientists are wowed and confused in equal measure by what we are discovering on the Costa Rican deep seafloor. Listening to our live broadcasts of ROV SuBastian’s dives, you will frequently hear exclamations of excitement and awe… followed by “What is that?!”

We have managed to collect specimens of some of these creatures. These specimens have been catalogued, photographed, examined under the microscope, and sampled for their genetic material so that we can either identify them either as known species or describe them as new species.

Here are some of my personal favourite discoveries so far from the depths of Costa Rica:

Biremis n. sp., or the ‘pompom worm’
Discovered in 1970s off the Bahamas using the submersible Alvin, Biremis belongs to a group of polychaete worms called terebellids. Most terebellids spend their lives living in tubes on the seafloor. In fact, they spend so much time hanging out in tubes that many species have evolved complex bristles suited to this tubular life. Biremis, however, seems to have struck a different path in life, evolving from ancestors stuck on the seafloor to freely swimming in the water column. This may help it to seek out new feeding locations. With only one species of Biremis described at present (from the Caribbean), it came as a great surprise when we recently discovered this unusual worm at more than 1000m depth off of Costa Rica.

Sicafodia n. sp., or the ‘deep-sea aphid’
Members of the group of crustaceans that this critter belongs to were first described in 2004 from the deep waters surrounding Tasmania, and since have additionally been reported near the Farø Islands in the North Atlantic. Now, we have collected specimens of this microbeast from an underwater mountain in the deep waters of Costa Rica. The most extraordinary part of this animal is the shape of its mouthparts, which have been drawn out into sharp piercing points. We believe this unusual adaptation enables it to feed parasitically on corals, much like an aphid feeds from a rose bush!

And speaking of corals…

Swiftia n. sp., or the ‘seep coral’
Most corals are unable to survive in the toxic waters that are exuded from methane seeps, such as those off of Costa Rica. This little coral, however, seems not only to be able to survive but thrive in this extreme environment! Diet analyses suggest that this coral is gaining a large portion of its nutrition from the methane seeps themselves. It is possible that it filters chemosynthetic microbes from the seep waters or they may have microbial symbionts living within its cells, like some shallow-water corals have symbiotic algae living in their cells. This is a mystery that we are currently working to unravel.

With more dives to come on this research cruise who knows what unusual creature we’ll be lucky enough to see next? I, for one, cannot wait to find out! 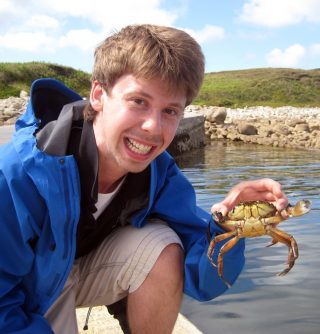