“There’s nothing wrong with enjoying looking at the surface of the ocean itself, except that when you finally see what goes on underwater, you realize that you’ve been missing the whole point of the ocean. Staying on the surface all the time is like going to the circus and staring at the outside of the tent.” – Dave Barry

Nearly two-thirds of our blue planet is covered by water, and yet there are still huge areas of the open ocean that remain a mystery. What lies beneath the cobalt waves, and what structures life in the seemingly featureless open ocean? These are the questions the scientific team aboard the R/V Falkor are seeking to answer in the White Shark Café. The café – situated about halfway between the Hawaiian Islands and Southern California in the Northern Pacific Ocean – is so named because of the extensive use of the area by white sharks as revealed by satellite tags. But what are the oceanographic conditions that are related to and constraining white shark occurrence and behavior while they are in the café? My team’s role on the ship is to use a type of Autonomous Underwater Vehicle (AUV) called a glider to measure the oceanographic features beneath the surface, which may help explain the behavior of the white sharks while they are in this open ocean environment.

Meet OTIS
The University of Delaware’s glider, OTIS (Oceanography Telemetry Identification Sensor), will be deployed in the White Shark Café for approximately two and a half weeks during our four-week cruise. The glider is capable of measuring conditions of the water column from the surface to 450 m (~1476 ft) deep, collecting measurements of ocean temperature, salinity, oxygen saturation, chlorophyll concentration, and color dissolved organic matter every few seconds. The glider is also outfitted with acoustic telemetry receivers that record detections of any nearby white sharks (Carcharodon carcharias) or other marine animals carrying compatible acoustic transmitters. These tags emit a sequence of pings that are unique to each individual, like a barcode made of sound, allowing us to distinguish between individuals. My job, with help from Dr. Matthew Oliver and the rest of my team back in Delaware, is to pilot the glider around the café, to try and understand as much as we can about the sub-surface oceanography and use the glider to record detections of tagged white sharks.

Uncharted Territory
To my knowledge, this will be the first time a glider with built-in acoustic receivers will be deployed in the open-ocean. It is a big, deep ocean out here, so we are searching for the proverbial “needle in the haystack.” However, previous studies have successfully used OTIS to detect fish carrying acoustic tags in the Mid-Atlantic coastal ocean. In the coastal ocean, environmental conditions related to proximity to shore, river plumes, and dissolved organic matter are associated to the coastal Sand Tiger shark (Carcharias taurus). However, in the open ocean I would expect temperature and oxygen constraints to play a stronger role in structuring the white shark’s behavior. The mobility and autonomy of the glider allows us to test whether or not tagged animals are related to sub-surface environmental conditions, while also separately collecting hundreds of profiles of the ocean – day and night – for weeks during our research expedition. This dataset will provide a crucial underwater view of the invisible structure of the ocean and will add environmental context to the extraordinary research being performed by other teams aboard the ship. 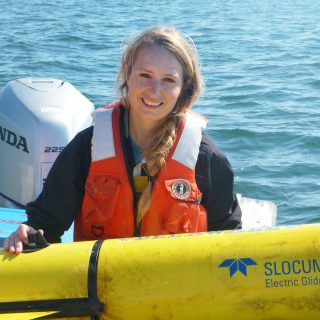