I have been dreaming about this day for a long time. I arrived at the White Shark Café region – about halfway between Hawaii and California (see figure below). I have been, with my lab team and collaborators, planning this expedition for three years, and have had many a sleepless night.

Taking a ship as spectacular as the R/V Falkor to a place 1400 nautical miles from Hawaii in search of a mystery surrounding a large mobile predator is to me a “Voyage of Discovery” on the high seas. These days, such expeditions are challenging to arrange and fund. So I am thrilled to be here on a magnificent research platform. We have a chance – probably only once in our lifetimes – to address a major question in the life history of these iconic sharks with state of the art oceanographic equipment. Why are white sharks here in the open sea? Is the Café a geographic place they recognize? Or a hydrographic place – with mysterious boundaries only visible to the sharks? Is physiology driving their migratory behavior, or some mysterious oceanographic front that concentrates prey? What is it they do here? Forage or mate? And what makes the subtropical gyre a core part of their habitat? I have also been concerned about their sojourns into these unprotected high seas – an area where no rules really exist and industrial fishers rule.

From Every Angle
I assembled four distinct teams to work on this research program, all with a range of expertise and experience on the high seas, including senior researchers and students of white shark ecology, midwater ecology, molecular ecology, and biological oceanography. For me the cruise is a microcosm of our fields: How can we conduct biological ocean observing and monitoring in a remote oceanographic location? How do we census marine environs that have rarely been studied? We are asking as a team simple questions for the 21st century: What lives here and why? How many animals are there in the white shark population? Why is the subtropical ocean important to their life history? Where do they forage and breed here? Can we sample the epipelagic and mesopelagic environments and from the synthesis, understand how the ecosystem works? Can we “census” who is here with a combination of acoustics, DNA, ROV surveys and net tows, and if so, what does this explain about white shark ecology or our high seas ecosystems in general?

I am passionate about large mobile predators such as lamnid sharks (white, mako, salmon sharks), tunas and billfishes. What they all have in common is they travel great distances with ease, across the open ocean realms, often moving from coastal to pelagic realms. They also dive regularly from the well-lit surface waters to the mesopelagic – a place I often call the “peanut butter layer” of the ocean – I think, if you are hungry shark or fish, you can find a bite to eat. These pelagic animals are powered by warm muscles and visceral cavities, and some species – including white sharks – even warm their brain and eyes. Now that we are on our research voyage, the question remained: would we find the white sharks in the Café?

Programming the Satellite Tags
I knew finding sharks would be challenging. By putting out 37 Wildlife Computer pop-up satellite archival tags in the sharks fall and winter foraging grounds we increased the odds of being in the right place. We spent spectacular fall and winter days in the National Marine Sanctuaries off California working with these white sharks, and lured them close enough to our small research boats to electronically tag them for this mission. 33 of the 37 sat tags were still on white sharks when we left Honolulu. So the day I dreamed about came on my 60th birthday. That seems old to me. However, I entered this decade with a big bang, and the extensive cruise planning paid off. My most memorable gift of the day was just when the team needed a lift, after a 1000 nm voyage into the Subtropical Gyre, several satellite tagged white sharks released their instruments within hours of one another and signaled to our ship, telling us where we should probe the depths to learn their secrets.

My favorite part of the day was discovering the positions of the sharks after anticipating them for months – it reminded me of the first pop-ups on Giant bluefin tuna off North Carolina in 1997. I was definitely beginning to get concerned as the early sharks popped up in odd places, east of the cruise box and west – one as far as French Frigate Shoals in the Hawaiian Islands. Finally, on the 25th of April, one tag sent its position to the ship from the center of our cruise box – a large, 16 ft white shark Taylor Chapple tagged at Año Nuevo. This was followed by a second, a slightly smaller shark, in the northwest corner of our Cruise Box, that graduate student Tim White and I tagged in November 2017, also at Año Nuevo. In the early hours of the 26th, two more tagged sharks appeared giving us a total of four white shark pop-up locations in the Cruise Box to target our oceanographic research. Two Saildrones that were here before us – sent to circle two tags – were acquiring data on the deep scattering layer depth and currents, and potentially “acoustic” tagged shark data.

This day was also special as we have successfully isolated our first DNA from water samples taken from the Falkor’s CTD at several ocean depths, and confirmed with shipboard sequencing on a Min Ion sequencer that our ocean water column has DNA of lamnid sharks (i.e., white, mako and salmon sharks), along with common threshers – and with only 1% of our 12 gigabytes of DNA sample has been analyzed. I celebrated my entrance into a new decade, and did it in grand style as a researcher on a Voyage of Discovery- with cutting edge technologies that all worked today, the 25th of April. 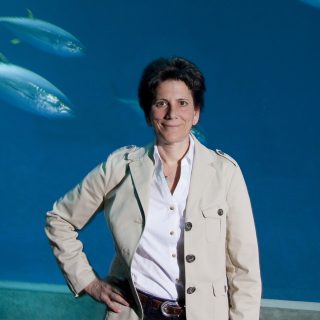