Do shallow arc volcanoes supply iron to phytoplankton in the open ocean?

Scientific research on a moving ship is a real challenge. We have to perform precise sampling and chemical analyses, all while adapting to a rolling ship. On this expedition, we are using two separate and specialized CTD (Conductivity, Temperature, Depth) systems – one to search for deep hydrothermal plumes from the Mariana back-arc, and the other to look for shallow plumes from the volcanic arc to the east of us. Each of these systems is equipped with sampling bottles, so that in addition to the information we get from the CTD sensors, we can also collect water samples to do other chemical analyses.

When we do shallow casts with the “Trace Metal CTD,” one of the many seawater properties that we are measuring is the trace metal chemistry of ocean waters. Metals like iron, aluminum, and manganese are very abundant in the earth’s crust, but are only present in the ocean at very low concentrations (nanomolar, or parts per trillion!). Phytoplankton need small amounts of these metals, especially iron, to grow and photosynthesize. In some areas of the ocean, iron concentrations are so low that they limit phytoplankton growth, which leave behind unused macronutrients (like phosphate and nitrate). These areas are known as high nutrient, low chlorophyll (HNLC) regions, and are found in the North Pacific, Eastern central Pacific, North Atlantic, and the Southern Ocean.

Hydrothermal plumes like those found in the Mariana Back-Arc are often rich in iron, but they are very deep and far from the sunlit surface ocean where phytoplankton grow. However, to the east of the back-arc, the Mariana Volcanic Arc is composed of many shallow, hydrothermally active seamounts that release plumes rich in iron. Currents can carry the iron-rich plume far from the source volcano. The plume gets diluted as it moves through the ocean, but iron concentrations are still measurably higher than the average parcel of seawater.

Currents: Highways through the Ocean

Over the Mariana Volcanic Arc, the North Equatorial Current transports water to the west, where it eventually flows into the Kuroshio current, which can transport water north to the HNLC region in the North Pacific, or into the Mindanao Current which flows south to the Equatorial Undercurrent (EUC). The EUC acts like a giant pipeline, transporting twenty times the volume of the world’s fifty largest rivers annually straight to that HNLC region in the Eastern Equatorial Pacific. It’s been hypothesized that iron from hydrothermal vents can be transported great distances by these currents, potentially feeding these far-away HNLC regions in the Pacific and affect phytoplankton growth and carbon uptake. We are sampling iron concentrations at increasing distances from the volcanic arc to see if the Mariana seamounts are an important source of iron in these currents and how the high-iron plumes are transported across the ocean.

In the last few decades, the oceanographic community has made great strides in our ability to collect and analyze trace metal data. We’ve refined our sampling protocols, and chemical analyses have become much more efficient. On a metal ship, there are lots of chances for trace metal samples to be contaminated. We have to use special sampling equipment to try and eliminate these contamination risks. We use a powder-coated CTD rosette (an aluminum frame is covered with a plastic polymer), as opposed to the stainless steel rosette that we’ve been using for tow-yos to collect hydrothermal samples. We also use special sampling bottles called Go-Flos, which are different than normal Niskin bottles in that they have few metal parts – no internal metal springs or metal clips. Instead, they use a rotating ball on both ends connected by an external bungee to close the bottles when they are triggered from the science control room. We also make a great effort to eliminate contamination while handling the bottles, touching them with gloved hands only, keeping spigots covered with gloves, and covering the tops with fashionable, high-tech covers (shower caps) when not in use to prevent any rain, dust, or ship exhaust from affecting our measurements. 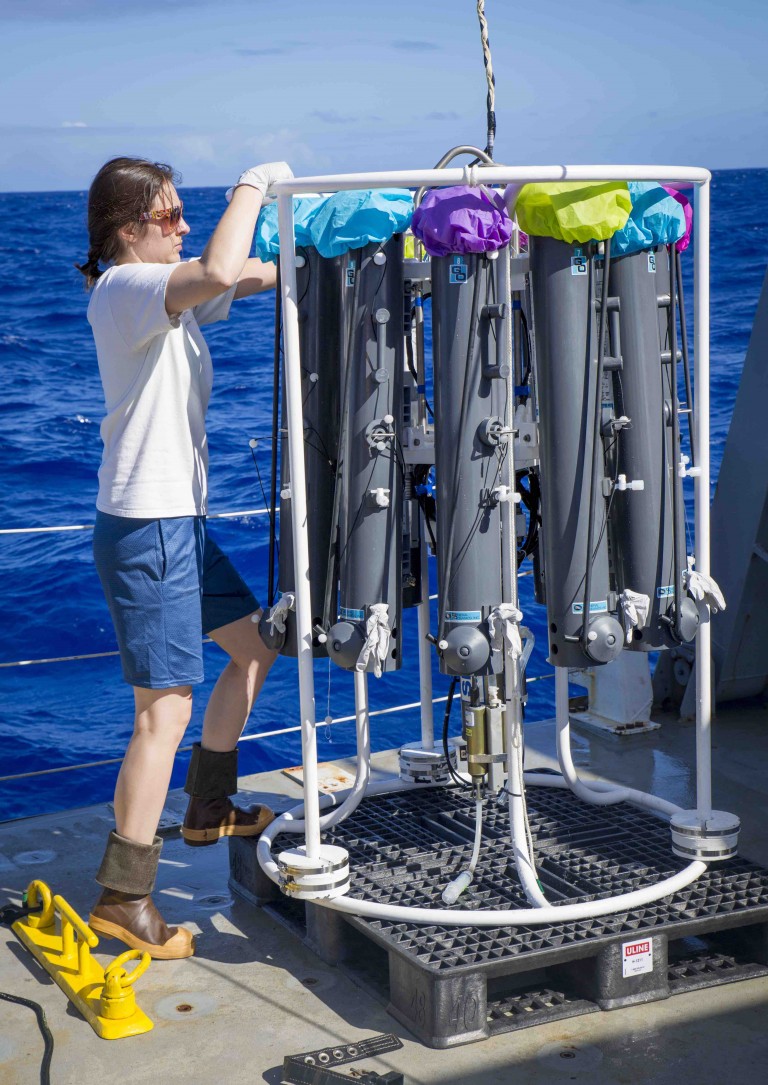 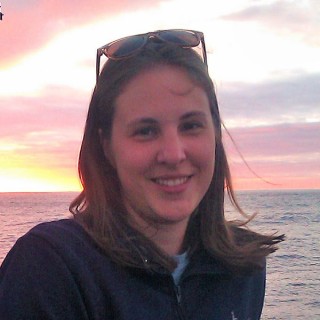