The excellent data coming from Falkor’s high-resolution multibeam sonars have revealed breathtaking, never-before-seen details on every feature we’ve mapped so far in the Papahānaumokuākea Marine National Monument. But at the flat-topped structures named Nero and Ladd, we’ve found something particularly intriguing.

Both Nero and Ladd are known as guyots. Named after geologist Arnold H. Guyot, the term refers to a flat-topped volcano that has been above sea level at some point in geological history, leading to erosion that cut its top off. In contrast, a seamount is a structure with a summit at least 1,000 meters above the surrounding seafloor that retains a conic volcanic shape because it never reached the surface.

As discussed in the previous blog about Midway Atoll, islands form and sink, allowing corals to grow as a cap. An atoll is the last stage of an island’s life above sea level, when only coral platforms remain at the surface. As atolls sink below sea level, they become guyots.  Even deep guyot summits often contain fossils such as coral species that live mostly in shallow water. Nero and Ladd have relatively shallow tops at about 65- to 120-meter depths.

Sea level has been as much as 120 meters lower than present within the past 150,000 years, with plenty of long-term fluctuation. So, both Nero and Ladd guyots would have been repeatedly exposed and submerged, with the most recent exposure 20,000-25,000 years ago.

The shapes of these circular structures look very much like the neighboring atoll lagoons at Midway and Kure, so we could be seeing sunken lagoons. But this begs the question: what is in the center of the lagoons? Could it be coral at these depths?  If so, is the coral live or dead?  Members of our multibeam processing team have years of experience surveying coral reefs in the Pacific, and they agree these bathymetry data look very much like live shallow corals.

This leads to the main question we’re asking, which is whether these might be mesophotic reefs, which harbor corals and associated communities at water depths from 50 to 150 meters. Light penetration is low at these depths, but it is enough to support corals. Mesophotic reefs are found off of Maui in the main Hawaiian islands, so we know it is possible that there are live corals.

On the other hand, divers with the Monument have done extensive work in mesophotic depths on neighboring Midway, Pearl and Hermes, and Kure Atolls and have not yet found coral ecosystems. So, through our work on this cruise we’re raising many possibilities for future research using remotely operated vehicles, autonomous undersea vehicles, submersibles, and/or deep scuba diving techniques to investigate the tops of these guyots. We’re also planning to look for similar structures during continued mapping on the 2nd Falkor Monument mapping cruise that begins in May. 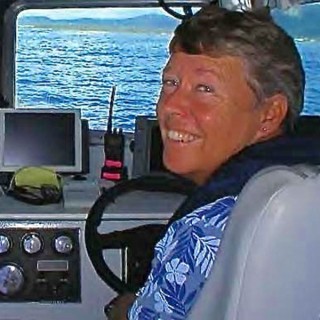