“Eventually man, too, found his way back to the sea. Standing on its shores, he must have looked out upon it with wonder and curiosity, compounded with an unconscious recognition of his lineage. He could not physically re-enter the ocean as the seals and whales had done. But over the centuries, with all the skill and ingenuity and reasoning powers of his mind, he has sought to explore and investigate even its remote parts, so that he might re-enter it mentally and imaginatively… he invented mechanical eyes and ears that could re-create for his senses a world long lost, but a world that, in the deepest part of his subconscious mind, he had never wholly forgotten.”  Excerpts from The Sea Around Us, by Rachel Carson.

Tomes, Tones, and Values
Of all the books I could have brought with me on a trip across the sea, I had whittled it down to seven. I remember staring at them while packing, knowing it really was only reasonable to bring two, tops (there is a library on the ship). The two I finally reached for were by Mary Oliver and Rachel Carson, the two women writers. And while Dream Work was a thin, worn standby, the original 1951 hardcover copy of Carson’s The Sea Around Us was a new acquisition for me.

I couldn’t have asked for a better companion as an artist at sea. Despite her scientific basis being nearly seventy years old, Carson’s sense of wonder and grasp of the big picture was entirely relevant and captivating. Reading The Sea Around Us each night reminded me of what a hero and role model Rachel Carson is for me, and also the importance of what I was attempting aboard the Falkor: communicating what we have found to be true within and below the vast oceans with its rightful intrigue and glory.

This voyage has reinstilled my passion for representing basic geographical concepts, of which maps are only one particular mode. My aim is to use natural, more organic colors and materials when depicting scientific, ‘technological’ visualizations. Often the color palette of a software program or the simplified graphics we use to publicly share ideas and information belittle the fact that these locations, these geophysical properties, these massive landscapes we map, all have rich earthly tones and values, have imperfect textures, possess intriguing stochastic shapes and patterns. We often lose those flavors of the realities we study when we only rely on digitally manufactured visualizations.

All the Nothing
I admit, land was a welcome sight. I got up in the early morning darkness just to see its faint glow on the horizon.  But as we continued to approach Oahu in the increasingly bright and bustling day, I could feel something slip away that had been with us for nearly three weeks. Something that was both mesmerizing and dull, constant and fleeting, vast and confined, equanimous and indifferent. All the great nothing.
And as soon as we docked, I could feel that all the ideas and experiments and artwork I had created suddenly had much less space. They were no longer cradled in the hard but reliable ease of unending days at sea. Nothing on the horizon. Nothing to interfere, interrupt, distract, destroy. And this is where I am now, the next task at hand: to bring back the art and ideas created in such a different context, and give them legs in this busy, hard world on land. 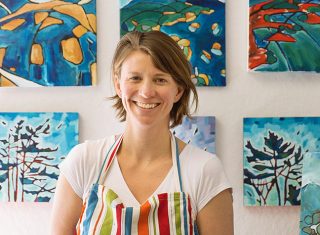