Underwater landslides are common features on steep continental margins. Sediment and rock move down a slope dramatically under gravity, just like similar mass wasting events that occur on land, such as landslides and avalanches. Landslides are the failure of sediment on a slope with preconditioning factors, including weaknesses in layered strata or groundwater flow through the sediment layers. They can be triggered by shaking due to earthquakes.

Underwater (also called submarine) landslides rapidly shape the seafloor environment by transferring large quantities of sediment and rock downslope from the continental shelf into the deep ocean. The result is a ‘clean slate’ for seafloor organisms to colonise by providing a new type of habitat with a rough seafloor topography, and thereby influencing local biodiversity.

Submarine landslides are important to study as natural hazards because they can threaten seabed infrastructures like pipelines or undersea cables. Coastlines are also at risk due to the landslides’ ability to generate tsunamis from the rapid movement of large volumes of seafloor. Tsunami modelling of a slide in the northern Great Barrier Reef – called the Gloria slide – shows these landslides have the potential to generate significant tsunamis.

During Leg 1 of this voyage, the Falkor mapped the Swain slide: a huge 10 km by 20 km landslide extending off the Swain Reefs in the southern Great Barrier Reef using a high-resolution multibeam echosounder. This slide occurs about 250 km offshore of the Australian mainland at the Swain Reefs, which is the farthest part of the GBR from the coast.

By combining previous multibeam data from the RV Investigator and new Australian Hydrographic Office airborne LiDAR data over the shallow Swain Reefs, a stunning new picture of this section of the reef has emerged. The new seafloor map data reveal sediment compression waves toward the base of the slide scarp, in amongst large rafts of intact seafloor and surrounded by numerous small blocks in a very chaotic debris field.

Unfortunately, the East Australian Current (EAC) was too strong to deploy the ROV SuBastian to reveal the slide in its full glory. We do not yet know when this slide occurred in the geological past, as samples from the overlying sediment are required to date these features accurately – and that now must be left for another day. However, research will continue into how these dramatic geological processes have influenced the shape of the Great Barrier Reef and any potential tsunami impact from these landslides. 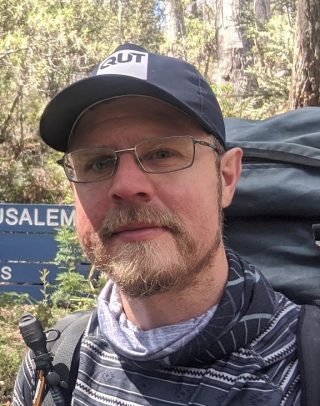