Loihi seamount is an underwater, hydrothermal vent site that sends iron-rich water into the ocean in a plume.  In addition to the dissolved iron, the hydrothermal fluid also contains a lot of iron-rich particles.

My job along with Mike is to collect these particles so they can be analyzed using a synchrotron light source. Although this sounds like something out of the future, it simply is a large tool that uses powerful X-rays to map the particles and measure their chemistry and mineralogy (the study of minerals).

So what about particles?

Thinner than a human hair

Before we can take the particles to the synchrotron (that fancy machine we talked about), we have to get extract them from the seawater.  We do this by filtering collected seawater from the Niskin bottles on the CTD with a filter that has very small holes. When we say small, we mean 0.2 microns across; there are 1000 microns in a millimeter. One human hair is about 200 microns wide, so a single hair is 1000 times too wide to go through a hole in the filters! The particles that are larger than the holes get stuck in the filter, while the rest of the water passes through the holes.

Because the particles are made of reactive metals, mostly iron, they can oxidize (rust) very quickly.  For this reason we try to collect the samples as quickly as possible and protect them from oxygen by using nitrogen gas.  And if that weren’t enough, we also keep them frozen to prevent them from changing.

There are several ways to measure the chemistry of particles that we collect by either dissolving them and measuring their concentrations, or leaching them with different reagents to measure how reactive they are.  This will tell us the average chemistry of a lot of particles.  If you want to know the chemistry and mineralogy of individual particles, and how many are present, you have to measure them directly.  We make these direct measurements using the (drum roll please)… synchrotron.

A synchrotron light source is a type of particle accelerator.  It shoots electrons very fast and bends them into a circle.  Changing the direction of an electron makes it emit light, and changing the path of a lot of electrons accelerating very fast, makes them emit the light as x-rays.  These x-rays are harnessed to make measurements.  Synchrotron’s are very large facilities, the one at Argonne National lab is so large we ride bikes to get around inside.

When we look at hydrothermal particles using a synchrotron, the photo shown to the left is what we can see. Iron is red, calcium in green and Zinc in blue; the scale bar is 200 microns. I wonder what the synchrotron will show for the Iron that we collect from Loihi seamount… I guess we will have to wait a little bit longer to find out. 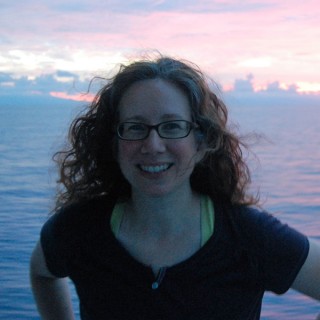