After spending a day off shore and calibrating all the equipment, we are off to our destination! It will take approximately 15 hours to transit to the south east corner of Hawaii Island to Loihi Seamount. Since the remainder of the cruise will focus on what we find at the world’s largest underwater volcano, let’s explore deeper into AUV Sentry. When Sentryisn’t flying around to exotic ports or spending time at Woods Hole, she is doing her day job – diving for science.

To prepare Sentry for a dive to the bottom of the ocean, the team begins prepping the vehicle at least two hours prior to launch time. The pre-dive begins by discussing the goals, then developing a practice mission using software for Sentry to interpret. You can think of this mission as a type of scavenger hunt that includes waypoints, depths and speed of travel, and frequency of sampling objectives thatSentry will try to accomplish in the ocean. While the mission is developed, the rest of the team gets to work on prepping the software, hardware, and electrical systems for the dive. We work off of a constantly improving checklist that strives to make each pre-dive as similar and routine as possible. This allows us to easily determine if the vehicle is behaving out-of-the-ordinary. Perhaps the most important item on our checklist is the Decktest. Working from the control room inside the ship, we can access Sentry and run a program that sends faux obstacles and targets to exercise the AUV.

Once Sentry passes the test and is approved for diving, the entire team collaborates with the ship’s crew to get Sentry loaded onto a crane and released safely into the ocean. This takes plenty of coordination and practice, as this is the Sentry’ team’s first visit onFalkor. Before the launch, Sentry is loaded with heavy weights that cause it to descend quickly out of view. When it reaches a pre-programmed altitude above the sea-floor, the controller will release some of the weight so that neutral buoyancy is achieved. Once this occurs, the AUV will begin “flying” along the bottom and making its way through the tasks that were programmed into the mission.

While diving on the sea-floor, Sentry navigates along a predefined path that allows us to determine its progress. While most of us have become accustomed to nearly limitless data transfer, this is definitely not the case underwater. Instead of high-bandwidth electromagnetic waves, oceanographers communicate with low-bandwidth acoustic waves. Though we are able to track the AUV’s location and send occasional short messages down to the vehicle, we have limited control from the ship. This highlights a big difference between a ROV (remotely operated vehicle) and an AUV. The ROV typically has a tethered, high-bandwidth connection that allows it to accomplish very precise tasks with a human operator, however, it is relatively restricted in spatial movement. The AUV is more suited for large-area surveys that do not require complex tasks.

AUV Sentry will typically dive upwards of 22 hours at a time, finishing only when the batteries have depleted or the science objectives have been met. At the end of the dive, Sentry will drop additional weight and quickly ascend. Upon return to the surface, the Deck and Electrical teams plug Sentry into the ship to initiate battery charge and download the newly acquired data. WhileSentry’s work for the day has been completed, our team is just starting, as we work to transfer the data to storage devices on the ship and begin making sense of the information collected. The first step in data processing is to determine Sentry’s actual location on the earth’s surface at each point in time by correlating between the ship’s GPS and acoustic tracking systems, and the vehicles own estimate of location. This allows us to geolocate the position of each data sample, photo, or bathymetry reading. We create detailed maps of the sea-floor and provide georeferenced data arrays of photos, oxygen levels, temperature, conductivity, and optical backscatter that help scientists determine what is going on 6000m below the surface. In a few short hours, Sentry’s batteries will recharge, data will be offloaded, and we repeat the process all over again. Stay tuned as we deploy Sentry at Loihi Seamount for the first time on this expedition early tomorrow morning. 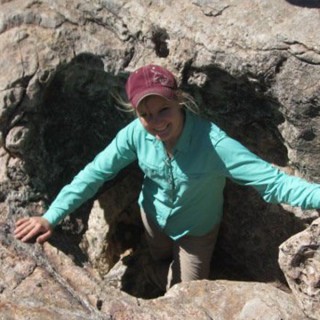