What a year 2020 has been. We have all had our lives disrupted in so many ways, and for many the impacts have been far-reaching. Some of us have been very fortunate to be able to continue working – albeit in very different modes and capacities to what we are used to. For most scientists, fieldwork has definitely been off the agenda, with travel restrictions and border closures making it difficult, if not impossible, to plan and conduct fieldwork.

Most scientific research vessels have been confined to port, and cruise schedules that were years in the planning have been scrapped. My own research group and colleagues had a voyage cancelled that we had been planning since 2016. R/V Falkor is one of the few research vessels that has continued to operate and collect scientific data during the Covid-19 global pandemic—because she has been in Australian waters since December 2019, with much of that time-based in my home state of Queensland.

My name is Mardi McNeil, and I am a marine environmental geoscientist from Queensland University of Technology in Brisbane, Australia. I study limestone rocks and sediments from reef environments to understand past and present geological processes, depositional environments, and their response to climatic change. We are particularly interested in how these environments and processes have formed and changed over geological timescales, especially in response to the climatic changes that were experienced at the end of the last Ice Age when oceans warmed and sea levels rose rapidly.

I first sailed on R/V Falkor as an SOI Student Opportunities Participant in 2017. The current voyage is my fourth expedition on R/V Falkor, having joined two previous voyages this year; Seamounts, Canyons and Reefs of the Coral Sea, and Northern Depths of the Great Barrier Reef. By the time we get home for Christmas, I will have spent 140 days at sea on R/V Falkor since August and worked with three Chief Scientists and two full Falkor crew changes. Falkor has almost become a home away from home. I thank my family for encouraging and supporting me to take up these opportunities, and the SOI team and Falkor crew for enabling the success of our scientific objectives and outcomes.

The Ice Age Geology of the Great Barrier Reef expedition brings together a team of marine geologists, oceanographers, and seafloor mapping specialists to explore and uncover the past shorelines, rivers, deltas, and reefs of the southern Great Barrier Reef that formed during the Last Glacial Maximum (LGM) when sea-level was up to 120 m lower than today. These features have since been flooded and ‘drowned’ when glaciers and ice-sheets melted at the end of the last Ice Age and sea level rose to present levels. This was a time of rapid environmental change and may help scientists to better predict and understand how these environments may respond to present and future climate change, sea-level rise, and changes to ocean circulation patterns. The high-resolution seafloor maps compiled from this expedition will inform modelling outputs such as tidal, hydrodynamic, biogeochemical, and atmospheric models.

I am joined onboard R/V Falkor by a small team of scientists and students, with a larger team of collaborators who could not sail, participating remotely from onshore. We are also thrilled to have Artist-at-Sea Taloi Havini join us for Leg 1 of this expedition. Taloi’s work from this expedition will feature in her first international solo exhibit at the Ocean Space, Venice, Italy, in 2021. 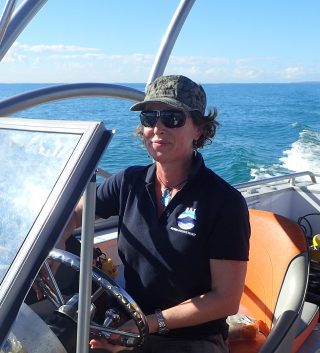