The Great Barrier Reef (GBR) hugs the north-east coast of Australia’s mainland and is the world’s most extensive coral reef ecosystem. It is the traditional home to the Aboriginal and Torres Strait Islander peoples of Australia and was listed as a World Heritage site in 1981. The reef provides extensive marine and shelf diversity – offshore shallow and inshore areas, mid-shelf and outer reefs, and beyond the continental shelf to oceanic waters to over 2,000 metres deep into the Coral Sea.

From November-December 2020, I joined the crew from Brisbane as we sailed north-east off the Gladstone port areas, exploring this vast sea country area of the Bailai, Gurang, Gooreng Gooreng, and Taribelang Bunda First Nations and their elders, past and present.

It was in these waters that I was the Artist-at-Sea participant, working with the science team led by Mardi McNeil from Queensland University of Technology. The expedition was concerned with mapping ancient undersea features like pinnacles, terraces, deltas, and “drowned reefs” that lay virtually unmapped and in very shallow waters that had been formed during the last glacial maximum (Ice Age) when the sea level was almost 120 m lower than it is today. It was exciting to be focused on this historical geological period, and like many explorers, we had high expectations to understand more about these reef systems, which have previously been unknown to us.

This was also my first time as part of a scientific research team. I gained much from them in many discussions, learning about the last glacial period and the time of Sahul, when Australia and Papua New Guinea were joined. I was relating this information to my place of birth in Bougainville, the South-West Pacific Ocean, when geologically, this part of the North Solomon Islands archipelago was once all joined. While the scientists talked about history, deep time, and the Pleistocene and Ice Age eras, I shared that my ancestors also spoke of when our chain of limestone and volcanic islands broke from each other, creating the current reef islands we live on today.

Another important part of the journey was the social life and space of the crew aboard Falkor. There was a whole community on board, not just the scientists or the technicians, but the Captain, Bosun, Deckhands, Purser, Engineers, and Stewardesses. The ship’s crew were all interested in the research findings. I shared my artwork with the crew and related to them as a Pacific Islander first and then as an Artist. The Pacific is home to ancient seafarers who did not rely on maps but explored the ocean by the wind, swells, birds, stars, and seasons. I told some naming stories of Islands and discussed how colonial maps had confined our people’s way of life and limited our ocean-dwelling practices into zones connected to land. Everyone I met on board Falkor was open to listening and sharing stories. I expressed my hope that more Indigenous and Pacific Islander artists engaged with future expeditions in Oceania.

I became increasingly interested in how bathymetry worked on the ship. Multibeam sonar technology measured the speed of sound from the ship to the seafloor, and the information received from these signals between surfaces is used to generate high-resolution visual data maps. The maps appearing on the screens before me soon after the fact were revelatory.

I also participated in some Ship-to-Shore discussions, including with Senior Knowledge Holder and Independent Curator, Sana Balai (from Bougainville and based in Sydney), about these new experiences. Emerging elders like Aunty Sana hold incredible amounts of traditional knowledge. It is part of our culture and customs to listen to our elders and seek their wisdom as we younger ones seek to relate to the world we inhabit. She explained that we use the very same tools to understand our world as science does: observation, testing, analysis, experience, and understanding.

We know the land and oceans by markers and other kinds of boundaries, and we also use sound and other sensory elements. One of the questions that arose for me was why visualising place from a singular perspective is so important, and to whom? As a visual artist, the idea of multiple perspectives often leads me into more in-depth inquiry. It makes me consider that maybe we are missing out on other sensory tools for understanding place. As an artist, I create and generate dialogue. It is about research and learning.

I am going to spend my whole lifetime listening to my elders. That is my science, Our Indigenous knowledge. It is a personal way of relating; we are connected to this place through story. This experience has given me the ability to see how high-tech science and contemporary art can intersect and further challenge our understanding of space and time.

For my next artwork commission, I am thinking very much about how sound is used to explore space. 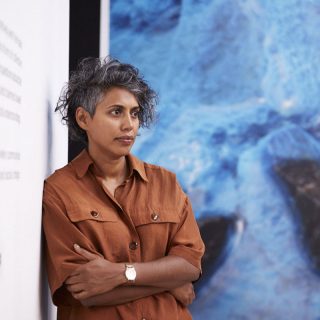