If you have ever read a scientific paper, you probably know how dry and dull they can be. As a graduate student I spend a lot of time reading papers and I can say with confidence that the methods section is often the most mind-numbingly tedious part – this is the portion of an article that describes the particular details of where a sample was taken or how an experiment is set-up. Usually these read as a list of facts like: “depth was 458m, temperature was 7.8°C” or a list of instructions (invariably in passive voice) like “0.5mL of concentrated acid was added to each sample after centrifuging.” Not exactly a thrilling read.

Sometimes to alleviate my boredom I imagine the scientists doing the experiment and what they might be thinking. Maybe the experiment was ended after 36 hours because the graduate student really needed to sleep. Or someone used a particular chemical because they were in a rush and it was already in the lab. If you search for “overly honest methods” you can find stories from scientists all over the world explaining their own stories.

Here is my story of overly honest methods:
On this cruise I, my PhD adviser, Dr. Scott Wankel, and WHOI postdoc Dr. Véro Oldham are setting up an incubation to see how quickly microbes in seafloor mud consume methane before it escapes as bubbles. We are setting up a total of 1200 (!) test tubes spread over six experiments which we will sample over the next six months to see how quickly the methane is eaten under different conditions. One task we have to do is add exactly 2.5 mL or ½ teaspoon of sediment to each and every tube. Little did we realize what an adventure this would turn out to be!

The first method we tried was making a slurry (or a mixture of mud and water) which we pipetted into each of our test tubes. However, we noticed that the mud would settle over time so earlier tubes would get much mud less than later ones, even when we shook the slurry frequently. To make matters worse, there were pebbles and rocks that caused constant clogging. As you might imagine if you have ever played with mud, work with sediment tends to be messy. By the end of the first day we were tired, cranky, and filthy.

Another Try
After a night’s rest and some coffee we started brainstorming ideas. We tried different combinations of metal spatulas and scoops from around the lab. We tried a sediment “gun” made of several syringes Frankenstein-ed together. We ran around the ROV hangar picking up random parts and tools looking for inspiration. Even some of the crew got in on the action and brought us empty epoxy guns and other bits and bobs to test. We settled on the idea of using a squeeze bottle, generously lent to us by the chefs on the cruise, which had served faithfully in the kitchen as a dispenser of salad dressing. Sadly the bottle leaked water and clogged with mud, leaving us in much the same dilemma. When we offered to return it the chefs, they politely declined. RIP Sweet Chili Dressing bottle.

Back to the drawing board we went.

At Last
Finally we decided on a new idea, a piping bag filled with mud instead of frosting. We would load plastic Ziploc bags with sediment and squeeze little dollops of mud into each tube, pre-marked with a line. And it worked like a charm! I love baking and decorating cakes back at home and weirdly the texture of mud and frosting are very similar. And with hundreds of tubes of practice I’m now a pro at piping! When I get back to WHOI I plan to decorate a cake covered in precise ½ tsp blobs.

In the paper we hope to write with our data, this saga will probably be condensed down to “Sediment was aliquoted in 20 mL balch tubes.” Someday maybe a graduate student will read our paper and never know all the trouble and trials we faced! 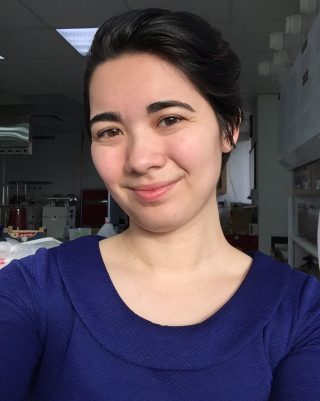