On March 7, 2018 at 8:05 PM local time, a meteorite broke up over the coast of Washington state, raining extraterrestrial rocks down into the ocean. This meteorite fall was detected by weather radars from the nationwide NEXRAD radar network, which recorded images of the falling rocks and data showing that they were composed of an unusually tough meteorite of unknown composition. The meteorite split into many different pieces, all hitting the ocean in a strewn field approximately 11km long. Eyewitnesses across western Washington reported the cloudy sky brightening significantly, and those near the coast reported sonic booms loud enough to shake their homes and cars. The massive size of the event caused impact signals to be recorded by ocean-floor seismometers, passive sonar, and even a weather buoy – this is the first time a meteorite fall has triggered and been recorded by these sensors. At present, the question remains unanswered – what kind of meteorite could cause a fall like this? Only by recovering at least one meteorite from the seafloor will we know.

Making the Most of Time (and Tide)
Aiming to maximize the science being done at sea, Principal Investigator Dr. Marc Fries, of NASA, and his team of international researchers will be invited to join Falkor’s crew during the ships sea trials to explore the area. The team will use remotely operated vehicle (ROV) SuBastian to search for meteorite material and explore the seafloor within Olympic Coast National Marine Sanctuary. Drawing from a previous voyage on E/V Nautilus, the suggested approach is to utilize sampling methods capable of sifting seafloor material to retrieve rocks in a previously explored range, and then focus on a location farther east where smaller, more numerous meteorites may exist. Falkor’s phenomenal engineering team is working on fabricating new tools for ROV SuBastian, made specifically for this mission.

Above and Below the Surface
The area in which this exploration will take place is called the Cascadia Margin, and it is known more for its happenings inside the Earth, rather than from overhead. Two tectonic plates (the North American plate and Juan de Fuca plate) meet at the margin – a subduction zone that extends from the coast of northern California up into Canada. As the Juan de Fuca plate moves to the northeast, it sinks (subducts) below the North American plate. The area is known for its tremors, as well as the many methane seeps that have been explored by Falkor in previous cruises, such as #HuntingBubbles and the Seeping Cascaida Margin expedition. 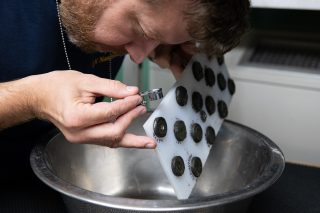 A Second Chance
Dr. Fries hopes to build on his work with Ocean Exploration Trust, NOAA sanctuaries, and the crew of the E/V Nautilus to attempt recovery of meteorites at the fall site. . The 2018 expedition resulted in seven separate seafloor sediment samples. Due to the soft sediment covering the seafloor, the meteorites were not easily seen. The samples produced a 2 millimeter bead of melted meteorite material. Though this piece is currently undergoing analysis, the melted condition makes determination of mechanical processes of parent material close to impossible. The team is hoping to recover less damaged or modified pieces of meteorite on this expedition.

Abrian Curington will also be on board as an Artist-At-Sea, working in her light-hearted, fantastical style to illustrate the journey and mission. Her goal is to create a large map, incorporating scientific data and weaving geological facts with geographical reckonings, creating graphic stories that champion fun, adventure, and overcoming obstacles. While she usually works in fiction, this expedition is a chance to remind those excited by fantasy/adventure to remember that our Earth is even more amazing than worlds created in imagination!

The resulting shipboard sensor data is archived at Rolling Deck to Repository.