I am glued to the screen, where a dark red blob appears on a sandy plain with ripples like road corrugations. It is a sea cucumber with a short, round body and octopus-like tentacles probing the sediment. The depth reading is 934m. As we move closer, the sea cucumber flings itself into the water column and swims off with its tentacles splayed out, translucent skin flaring. I feel immensely privileged to be exploring the depths in real time, just to see what is down here. We know so little about the ocean – even the top 10 meters where most of us do our research – let alone the depths below.

The Remotely Operated Vehicle SuBastian, piloted from the Schmidt Ocean Institute’s Research Vessel Falkor, slowly climbs the steep slope of Moore Reef, more than 300 km offshore in the Coral Sea. Rob Beaman is the chief investigator of this mission, and his voice comes through my laptop speakers. We are both at home, grounded from fieldwork by COVID19, and we are having a chat – but also looking for patterns, seeking explanations for what we are seeing, using what we know to infer what we don’t. Rob says, “You’ve probably seen most reefs in the Coral Sea and surveyed the shallow habitats of many; what would you say was your favourite, one that stands out?”

I want to be diplomatic and say that they are all unique… but actually this is not completely true, because here we are on the reef that did stand out for me. I have taken part in shallow reef surveys of the Coral Sea since 2007, and more intensively since 2016, primarily to gather information for Parks Australia with the ARC Centre of Excellence for Coral Reef Studies and James Cook University. Most of the itineraries had Moore Reef on the wish list. Even the very experienced captains who know the Coral Sea well had either never been there, or only visited a handful of times when the weather was extremely calm. This is a rare occurrence in the Coral Sea, where 25 knots is standard and 15 knots is a “glass-out.” In 2019 we were finally lucky enough to approach the reef on calm seas, able to see if it would be possible for the ship to anchor. On the charts it was a green blob, the only detail being the 1000 m contour line running straight through the middle. We were surprised to see a sand cay, and what we thought might be just a simple pinnacle rising from the deep turned out to have a complex structure, with caves, gullies and shallow crests of sculpted limestone.

As far as we know, no one had done a rigorous ecological survey at Moore Reef before. We chose three sites, one of which was on the wall that coincided with the 1000m contour line. Like the explorers of the past arriving in an unknown land, we had no idea what we would find. We dropped into the cobalt blue, grey and whitetip reef sharks gliding past, silvertip sharks emerging from the deep. We set about systematically measuring, counting and recording life on the reef, as we had done on reefs all over the Coral Sea. Generally on small reefs like this one, life is sparse and tough, adapted to very rough conditions and very slow to repopulate after cyclones or bleaching events. The picture that emerged instead was one of exceptional coral cover and richness, sustaining among the highest density, diversity, and biomass of fish. The abundance of small (<20cm) corals suggests that the currents transport plenty of larvae to this reef.

As I ran the transect tapes along the wall to record the life on this reef, my eyes were drawn again and again to the inky void below, and I felt myself drawn downward by an overwhelming curiosity – what is down there?

And now I am actually down there, but also comfortably at home in front of my computer – and I can not tear myself away.

All day I watch as the ROV climbs shallower, pausing for a closer looks at gorgonian fans, fossil corals, long-armed crabs, deep-sea cardinalfish and big-eyed sharks. Many of these creatures look similar to their shallow-water cousins, with tweaks to their biology and behaviour that allow them to live under intense pressure, in the dark and cold. Like those shallow reefs that are pummeled smooth by wind and waves, life on the deep wall of Moore Reef is sparse, but other scientists on the “Visioning the Coral Sea” team come online and comment on how much more life there is here than on other Coral Sea reefs. Are the same physical forces that make life so rich in the shallows at play all the way down here? When we can answer this question and the many others that arise during this research, we will be better able to protect these reefs. 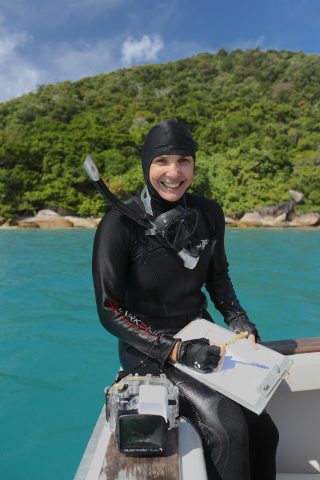