Exploration with the Falkor has always included science teams and this expedition is no different, well except that it is.  Our expedition leaders are not on the Falkor, but working remotely from their homes.  This is by no means the first time a research ship has conducted science by telepresence, but it is the first time the Falkor has completely conducted remote expedition planning and operations.  While the science team is ashore, that leaves the data collection, processing and some planning to those of us on the ship. Daily video calls with the science team and frequent chats  happen during the day to make sure we are all still on the same plan, informing them of changes and progress.  A live screen share from the ship to the science team allows them to watch the multibeam mapping data from their homes as it is collected in real-time.

Mapping with Falkor’s EM302 and EM710
The marine technicians on board are utilizing both Kongsberg EM122 and EM710 multibeam sonars to map the reef areas of the Coral Sea Marine Park.  Running both sonars provides us with higher-resolution data where the two sonar footprints overlap.  The EM710 is a shallower sonar and gives us better resolution in the shallow areas around the reefs, while the EM302 is made for deeper water so we can get a wider swath width coverage along the sides of the reef.

Bridge Focus
The bridge officer team is having to approach these reefs, not well charted in places, with a caution to safe navigation.  Considerations are taken with respect to the direction taken around the reefs.  The first pass near the reef is based on weather, the accuracy of the charts, and a forward-looking sonar tool much like multibeam, called SH90. The SH90 allows the bridge officers to see forward of the ship and identify any hazards that may be ahead of us.  The officers have taken two different approaches depending on the charts and previous lidar depth data that they have to work with. The ship first maps around the reef at a set distance, then works its way inward around the reef inside our own sonar coverage.  This allows the outer beams on the sonar to see further out than the ship, but still keeps inside known mapped depths.  The second approach utilizes existing, well-charted areas with lidar data, nautical charts, and the background image in the sonar display, so they can carefully work the ship into the shallower areas.  The SH90 sonar plays a big role in this second approach to navigating in shallow waters.

The Reefs
Once the ship has made a few passes around the reefs, we bring these data into a processing package called Qimera. Here the marine technicians review the overlapping sonar coverage maps and edit the sonar data of any spurious noise.  We then generate gridded surfaces that are provided to the science team ashore that are used to determine ROV dive sites and other areas of important geological features.  This collaborative work between the science team ashore and the marine technician team onboard is in constant communication with live chats and remote screen sharing.  It allows the science team to feel like they are here on the ship and involved in the work onboard, as well as aiding both teams in planning Falkor’s direction and location for the next ROV dive.

Flinders Reefs and the reefs to north in Fledermaus 3D perspective
While we don’t get to sit down and have a meal with the science team, it does feel like we are collaborating on achieving an outcome and continuing our mission to explore new and unknown areas of our ocean. We get to share and collaborate on the new features found and visualize with the ROV.

One of my favorite things to do is to map the seafloor with the multibeam systems, then see it come to life in video collected by ROV SuBastian. The marine technicians also manage the data and video coming onto the ship from the ROV.  We manage the live stream of this imagery to the viewers at home.  We get to experience the ROV dives from the Falkor’s control room and broadcast that to the rest of the world.

Stay tuned to the Schmidt Ocean Institue social media channels for livestream updates as we continue to explore the incredible reefs of the Coral Sea Marine Park. 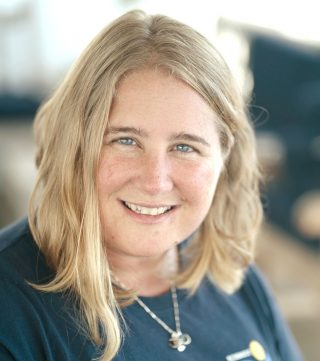