It has been nearly two weeks since the research vessel Falkor – with her crew, including Captain, stewards, cooks, deckhands, bosun, purser, and deck officers – steamed out of the Albany Princess Royal Harbour in Western Australia with a team of scientists, engineers, marine technologists, and (amazingly!) an artist on this adventure of discovery.

Every moment has been busy with recovery, cataloguing, labelling, and photographing the wonders we have retrieved from Bremer Canyon. The Remotely Operated Vehicle (ROV) SuBastian, plumbs the great depths, both to collect specimens, as well as sending up video footage. We are held spellbound as the ROV pilots in the control room negotiate the sheer cliff-walls of the canyon, as well as the fallen boulders and sandy flats of the mysterious depths.

Rocking on the waves above, we gather around the screens and watch with bated breath as the robotic arm reaches out to pluck a slender coral, then gently load it into a safe box. When a bivalve shell slipped once, then twice, from the robotic hand and tumbled into the darkness, there was not one of us who did not gasp as it fell away. There is also something of the feeling of the moon landing all those years ago. We watch, completely in the moment, willing the success of each manoeuvre.

Strange and marvellous fish, with fins trailing like medieval flags swim by, inspecting the bright intruder. Cadmium-red squid and bright mauve fish with large heads, whose bodies tail off to a point, drift languidly by. A pointed-nose angler fish swims through the light we cast, seemingly upside down – but that is its way! Everything is different at these depths, familiar but different.

The skull of a beaked whale festooned by mussels and scaled polychaete worms was brought up for close inspection. Hidden within the labyrinth of the bone were minute molluscs and many varieties of delicate worms whose secrets can only be gleaned under magnification. Samples of rock with elegant fossils caught forever within bring the history of time to the surface.

Finally, the ROV emerges as the light in the sky fades to darkness. It is then that our real work begins: sorting, labelling, cataloguing, photographing, and storing away carefully according to each discipline. Every one of us onboard are storytellers. We sort and classify and weave stories to make sense of the world, sharing our discoveries.

As the artist, I photograph everything that is brought on board by ROV SuBastian. There are treasures never glimpsed before: Corals that could be tens of thousands of years old, and living corals as well, entwined with delicate worms and brittle stars. By looking carefully and photographing everything, I am learning about these living things from the depths. I sketch with pencil and brush as well. My scientific colleagues are generous with their explanations.

It is marvellous at the end of the day to lay in my berth and be carried through watery space and time to the morning where new discoveries are waiting to be made.

These photographs give a small glimpse of what we are seeing. 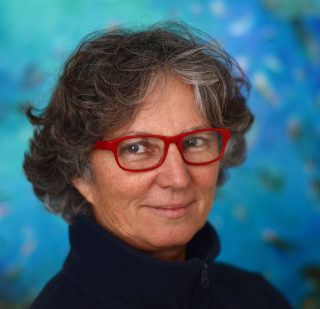