I started my PhD this year at University of Western Australia (UWA), working with Ryan Lowe who is also currently on Falkor.  I am collecting data to investigate the nutrient dynamics and productivity of Scott Reef, and how this relates to the physical oceanographic processes over the system.  Modelling has shown that open ocean water can be drawn from 250m over Scott Reef, which will have some interesting local effects that I am keen to quantify.

Further to intensive sampling from the TurboMAP, CTD casts are being undertaken every two hours over a series of 24 hour periods on this cruise. The CTD rosette has 24 specialised bottles attached, which are fired at specified depths within the water column, chosen at points of interest such as the chlorophyll maximum.  The chlorophyll maximum is a layer where phytoplankton productivity is the highest, and varies both spatially and temporally.  The science team is trying to capture the signature of the internal tide from the open ocean uplifting into the lagoon, and by taking water samples we will be able to identify the mechanisms and rate at which nutrients are delivered to the reef system.  Once the CTD is back on board, the water sampling team are ready with buckets and bottles to start collecting water for processing.

The first samples to be drawn from the bottles are analysed for their carbonate chemistry.  Oceans today are 30% more acidic than 200 years ago, a trend expected to increase over the next 100 years.  Burning fossil fuels produce large amounts of carbon dioxide, a large proportion of which the ocean absorbs, changing the chemistry by lowering pH (causing waters to become more acidic).  Many coral species build skeletons using calcium carbonate through calcification, and a more acidic ocean means they may not be able to calcify as efficiently. By taking measurements of the carbonate chemistry, we will be able to determine the quality of water at Scott Reef, including metabolic effects, and the response and resilience of the system to ocean acidification and changes in climate.

The majority of my time has been spent in the wet lab filtering litres and litres of seawater (942 litres to date).  Concentrations of nutrients and chlorophyll will be obtained, giving a precise indication of depth and intensity of phytoplankton productivity. The origin of water parcels, either from the open ocean or from the lagoon, can also be derived from these parameters, giving an indication of transport mechanisms.

Some focused sampling at North Scott on Falkor’s workboat has also been undertaken, where handheld CTD and Niskin bottles were used to characterise the water column.  North Scott lagoon has a much shallower (<20m) depth, and is enclosed apart from two narrow channels.  As a result, we will investigate whether these lagoon waters retain heat and experience more variable chemistry than nearby South Lagoon, due to a low flushing time. North Scott has not been well studied, so dedicated sampling over a full tidal cycle will give some insights into the contrasting dynamics of this lagoon. 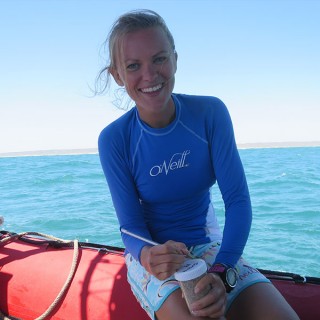