As night falls, lighting flashes over R/V Falkor and for an instant, it seems to be day again. The Indian Ocean has been very pleasant so far, but as we are in the tropics, rain and thunder are no surprise.

During World Ocean’s Day, we have reached the western coast of Sumatra and sailed overnight to get to our first survey location over the Mentawai gap. Rain pours down all night long. But as the sun rises, clouds scatter and the ship’s outer decks begin to dry. Just in time, as R/V Falkor has reached its destination and it is time to get busy again.

The lines are agreed upon and drawn by the scientific team. Over the daily morning meeting at the bridge, the final details are confirmed. Our targets over the next two weeks will be 26 imaginary lines, running parallel to the Sunda Megathrust – the place where the Indo-Australian and the Eurasian plate converge. The lines will guide R/V Falkor’s way, as we collect detailed seismic reflection profiles along their paths.

Early in the morning all the teams are ready. The crew assists the scientific team in the deployment of the seismic source and the streamer while in close communication with officials at the bridge. In the Science Control Room, the different screens show maneuvers and provide data on the status of the equipment. Soon after, the data gathering resumes.

Seismic reflection profiling provides accurate images of the subfloor structure – for a very thin segment of the ocean floor – down to a depth of around 2Km. This information is key to detect geological features such as active faults or past seismic event’s signatures.

At the same time, R/V Falkor´s multibeam echosounder is scanning the ocean bottom with a much wider scope, offering a high-resolution view of the existing underwater relief. Bathymetry and seismic reflection go hand-in-hand to deliver breakthrough information on the locked patch of the subduction zone.

The seas west of Sumatra guard many secrets. To unravel them is a puzzle, but one that the experts onboard enjoy. The challenge keeps Dr. Hananto, co-leader of the MEGATERA expedition, motivated: “We have to push ourselves; if we’re not open-minded then we can get stuck. We won’t be able to get anywhere. We have to look at all the details available to us and create something deeper than what we already know.” 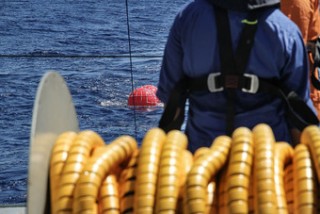 Dr. Singh agrees: “Discoveries are made when you go where no one has gone before!” he declares. “Yes, it is not easy to get here, it takes a lot of effort, but in the end it will be worth it of course.”