I intend take my experience on Falkor and morph it into a playable game or interactive fiction for people to learn more about ocean research. I have experimented in creating animations and pictures, as I believe digital arts have great potential in sharing understanding. With animation, a concept can be illustrated with motion, humour, and visual metaphors.

For example, I have tried thinking how to show two contrasting facts about ocean viruses. As Karthik explained, the sea is absolutely full of countless kinds of viruses. If taken by number, 95 percent of all biological entities in the ocean are viruses. Yet they make up just five percent of biomass.

Animation can also portray the unseeable. I have experimented with showing how Riftia take carbon and sulphur from the water around them. I have wondered how to show viruses that can infect sulphur bacteria with additional genes, to make them produce more energy.

There are plenty of ideas and amazing concepts to capture. Yet, as an artist I am also preoccupied with aesthetics and beauty. Trying to portray the deep sea has become particularly daunting because the video feed has looked so ludicrously epic. How could any digital paintings possibly compare to what SuBastian has filmed?

I sat in the control room. The dark of the control room accentuated the feel of being under the sea. I tried to capture the experience in words that came out like fragments of poetry: the black expanse of a rock liberally coated with white crabs; tiny white slow-moving arthropods that swim when disturbed, launching themselves into the water and flicking their curled tail, shooting backwards with legs streaming out in the opposite direction. They seemed powered by bursts of jet propulsion. On the other side of the rock was a thick kingdom of Riftia. Their tubes glowed luminous white in SuBastian’s light. The red fronds billowed and flickered in the sudden turbulence. SuBastian’s approach sent cascades of sediment, stained red in the searchlight, roiling across the Riftia and rock and crabs. The deep-sea sandstorm briefly obscured our view.

Then, slowly revealed, pagoda-like rock formations, extinct chimneys. Blobby fingers of carbonate thrust upwards. Together they formed a fantastical deep-sea fortress. (I appear to have written ‘It’s the Gondor of the deeps’ in my notes). The surfaces of the tower were streaked and spattered with white, while a splash of violent yellow at the base of one showed a sulphurous bacteria mat. A living, colour-changing carpet, if collected and left overnight, it turns white. So-called ‘fried egg’ bacterial mats of yolky orange and white splattered the sea floor.

Bright red shrimp peppering the matt of fibres and rubbish. White-black bacterial mat that looked like dirty house mould, or mouldy bread speckled with lurid green flecks. The further away white objects were, the more they acquired an eerie pale blue glow. Distant dead Riftia nestled in the cracks and crevices below SuBastian shone with azure ectoplasm and dots and splotches of drifting sediment drew streaky trails.

A rock-blocky skyscraper of a tower revealed a glittering underside of pyrrhotite (magnetic Fool’s Gold) looking like speckles of stars dusted against black fabric. It was surrounded by a collection of smaller Buddha-spire shapes marked in orangey red rust and black. As SuBastian passed they came into sharp and enhanced view, and faded out again. We looked up the tower, to the unstoppable rush of hot fluid streaming from the underside of a mirror pool at its top. It was the colour of sulphurous rushing steam and streams and smoke from hell, reddish-orange-purple that looked like fire underwater.

Mirror pools had been carved stepwise into the undersides of rock like upside-down rice paddies. A metre-high thin finger projection, appeared like an “Empire State Building” of the deep.

The long tail of a fish like a slim streak of paint. A wriggle like the tail of a waiting cat. The movement of a half-swimming, half-floating octopus was a languid pick-up and drop of its tentacles, each action seeming only to cancel the other one out. Then it flattened like a falling, drifting handkerchief, slowly settling down under gravity as SuBastian moved past, coiling the very tips of its tentacles into tiny fists. Its eyes were black and calm in its oddly humanoid head.

Before coming on the ship, the deep sea seemed impossibly, romantically isolated. A juxtaposition of hostile conditions, fathoms of water, crushing pressure, icy temperatures, and searing hydrothermal vents shielding its mysterious life. From the control room I have been able to watch SuBastian literally shining a light into those depths. And not only me, but thousands of other viewers from all over the world were watching the exploration. And I have realised: though life thrives down the seabed, the beautiful deep sea bed is not entirely untouched. Every so often, as we admired the view, we would come across the most alien sights of all – pieces of crinkled plastic, readable human letters, pieces of junk.

Sometimes, digital art just is not enough. For expressing colour and feelings, there is no medium quite like oil paint. 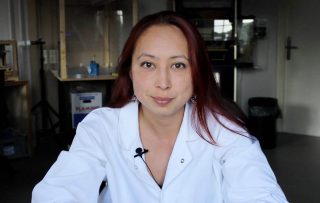