There are still many mysteries surrounding seafloor hydrothermal vent complexes. These hot (or at least warm) springs on the bottom of the ocean form when a body of magma rises towards the seabed, such as on mid-oceanic ridges or volcanic arcs, the boundaries of oceanic plates. The biological, chemical and geological relationships in these areas are complicated and intricate, intertwined in ways that are not completely understood. Moreover, we still do not know how neighboring vents influence each other, as new chimneys form while others shut down, and the ways in which life has to adapt. The big picture, a glance at the system as a whole, evades even most scientists as we are unable to experience this hostile deep sea environment in ways we would look at a landscape on land.

To get as close to walking on the seafloor as possible was the very goal of the Virtual Vents cruise – only, we brought the seafloor up to us instead of going down ourselves. Using cutting edge underwater survey technology, a digital model of an entire hydrothermal vent field was created to be explored using virtual reality simulators. “To work with a simulation is not the real thing, but it surely is next best to being there in person” explained Chief Scientist Tom Kwasnitschka, of GEOMAR Helmholtz Centre for Ocean Research Kiel, Germany. He led the expedition along with other members of the team from a variety of institutions, including Harvard University, Memorial University, the German Center for Artificial Intelligence and the University of Victoria, B.C.

The primary goal of this study was to create a series of 1-cm resolution 3D models of vent groups found in Tongan waters, specifically on the Northeastern Lau Basin. These models then formed the reference for layered environmental maps at unprecedented resolution that can help define the nature of venting, fluid temperature/chemistry, and animal clusters in these unique environments. The final product was the first ever open-access, virtual model of an entire vent field, not just individual chimneys. This innovative survey approach can spark new strategies of deep ocean floor research and create an immersive tool for public engagement. 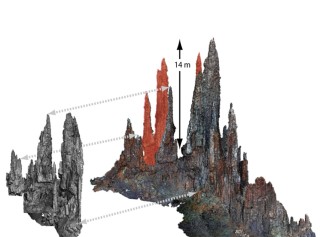 Photogrammetry is the process of making exact measurements from many overlapping photographs – the computer “sees” the world similar to how we use our two eyes. Using field-tested, state-of-the-art photogrammetric survey techniques, the team created three dimensional, full color terrain models at 1-cm resolution. These models can then be examined by scientists who can be anywhere in the world, free of the hurry and physical limitations of deep sea expeditions. Thanks to computer graphics technology developed in the gaming industry, the data can be explored on a laptop much in the same way as through high-end virtual reality simulators used at universities. Museums equipped with similar science visualization theatres are able to immerse their visitors in a deep sea world based on actual data.

Hot water changes the shape of the seafloor

When cold ocean water leaks slowly through porous material or cracks in the seafloor, the water comes into close proximity with molten rock, becoming heated. As the water seeps further down, it continues to increase in temperature and chemical changes begin to happen. Oxygen is removed and the super-hot liquid begins to collect elements and metals as they dissolve from the surrounding rock into the fluid. Even though this hydrothermal fluid can be over 400°C (750°F), it doesn’t boil because of the tremendous pressure from the deep ocean above it. 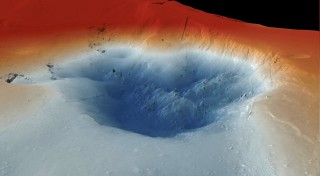 When the heated liquid does find an escape from under the seafloor, it rises up out of these openings (vents) and encounters colder seawater, rich with oxygen. Several more chemical reactions occur when they mix, the most notable being the creation of underwater geologic structures such as towers and chimneys. These formations are built when combinations of sulfur and metals such as lead, zinc, copper, iron or even gold precipitate, becoming separate from the liquid they are contained in. The solids then sink to the seafloor and slowly build up structures, deposit by deposit.

Seafloor hydrothermal vent complexes can be compared to household ventilation systems, in that these systems transfer heat and chemicals from the interior of the Earth, playing a big part in ocean chemistry. Entire ecosystems fueled by chemical metabolisms, as opposed to solar reactions such as photosynthesis, are not fully understood by scientists and could help explain how life could exist on other planets. The sites’ systems create an accumulation of valuable metals and minerals that businesses are looking to potently mine and extract.

Until recently, the costs of undersea mining were so high that it was impractical and not profitable. However, with developments in technology and Remotely Operated Vehicles (ROV’s), companies are now moving forward with plans for undersea mining. When this mining commences, the environment will be changed, and unless there is a pre and post mining record, the effects of extraction will be unknown.

We do not know what seafloor mining will look like, nor its impact, since it has never been done before. The industrial mining process will likely involve cutting down underwater chimneys, extracting the surface crust, and excavating sulfide deposits below. By mapping, measuring and recording the sites and their characteristics both before and after mining, future developments can be greatly informed and policies towards protection of the deep sea environment can be implemented. Studies such as this expedition will help manage undersea mining activities to be more transparent with known, measured changes, and outcomes.

To balance the aspiration of utilizing these locations as extraction sites with the interests of protecting deep-sea hydrothermal systems, new survey technologies are needed that will allow quantifiable and high-resolution monitoring for investigations of these remote environments.

All about the imagery 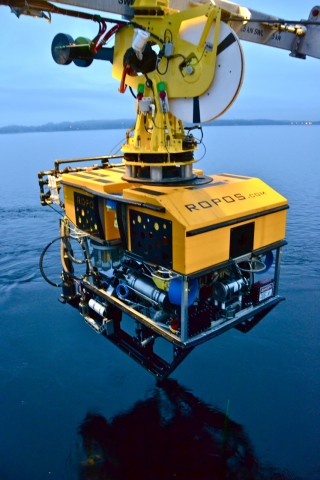 Remotely Operated Vehicle (ROV) ROPOS and a suite of survey cameras were the primary tools used for gathering footage and taking samples. A high-resolution survey camera, coupled with a powerful LED strobe flash, was used to survey the bulk of the vents, looking down on the seafloor as the ROV passes overhead. Using the high performance computer cluster aboard Falkor, a first version of the terrain model was extracted while still at sea, to check for accidental data gaps. To fill these gaps, the team also circled the vents for a side view, employing a stereo camera system that delivered a real time 3D preview of the structures. Another camera was dedicated to immersive telepresence, capturing the entire surroundings in front of the ROV in a single, panoramic image.

Huge changes for the ecosystems and geography of seafloor hydrothermal vent systems could be in the very near future. However, if these areas are not explored, investigated, and recorded before change arrives, then we may never know what was there. By using the cutting-edge 3D survey tools, the “Virtual Vents” team was able to open up this remote environment to the public in a way that had never before been possible.

ROV ROPOS data, as well as Bathymetry and XBT data are available at the Marine Geoscience Data System portal.

All of the rock samples collected by ROV ROPOS have been given International Geosample Numbers (IGSNs).  This spreadsheet details each sample and provides the link to more details of each geosample.

New Tech Brings The Ocean’s Abyss To Us

Hydrothermal Vents from the Deep Sea

Visit The Bottom Of The Ocean With Virtual Reality: Video

GEOMAR Image of the Month