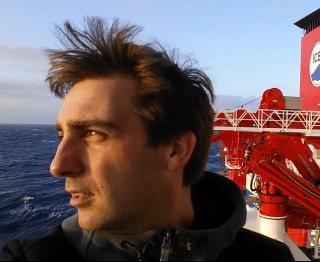 Kevin Köser is a senior researcher at the GEOMAR Helmholtz Centre for Ocean Research in Kiel, Germany.
His main research interest lies in novel, automated, camera-based measurement techniques and methodologies for investigating (deep) sea environments and processes. These help to explore, map and monitor (deep) sea habitats, to study phenomena or resources, or to assess potential impacts of human actions or natural hazards. Investigating novel visual methodologies involves modeling the underwater imaging and lighting process, as well as designing, adapting and calibrating camera systems and robotic carrier platforms, in order to obtain good visual data. This can be used for quantification in 2D (coverage, abundances, distributions), 3D (volumes, surfaces, 3D-distances, sizes) and 4D (changes over time, growth-rates). Since the amount of data is ever-increasing and will soon be the main bottleneck for science, a main focus of Dr. Köser’s work is also to develop automated algorithms that require no or very little interaction. For instance, automated extraction of maps or 3D models from video streams or thousands of photos allow a distant view and to get the big picture. Such representations are much easier to grasp and analyse for humans than looking at hours of video or raw single images.

Dr. Köser obtained a PhD in computer science (Dr.-Ing.) from Kiel University in 2009 for work on image-based 3D reconstruction, camera tracking and multiple view geometry. Afterwards, he joined the Computer Vision and Geometry Lab of ETH Zurich, Switzerland, to focus on large scale visual geo-localization, 3D registration and reconstruction, where he also served as a lecturer for  3D Photography and the Computer Vision Lab. In 2013, he joined the new-founded DeepSea Monitoring group at GEOMAR. He is a program committee member for the major international computer vision conferences such as ECCV, ICCV, CVPR, … and serves as a reviewer for several journals in machine vision and photogrammetry.