If you are aware of the current plastic crisis, you usually do not want to be caught sipping your beverage through a plastic straw or carrying your groceries with a plastic bag, and you definitely do not to use a styrofoam takeout container that takes an astonishing 50 years to degrade in the ocean. So when Chief Scientist Dr. Randi Rotjan walked into the R/V Falkor’s library carrying a pack of 50 styrofoam cups and instructed us to color on them with a beautiful selection of sharpies, it felt a bit taboo. Especially when she explained the plan was essentially to throw styrofoam into the ocean. Dr. Rotjan then quickly elaborated on this one exception for placing styrofoam into the sea: an experiment on ocean pressure.

You see, there are tiny air pockets in styrofoam, and sending a cup 2000 m below the water’s surface is the perfect way to demonstrate the immense pressure of the deep sea. Safely attached to the ROV SuBastian, the cups shrink to nearly a quarter of their original size as air bubbles are compressed.

After watching my styrofoam cup crush and shrink under the 1,200+ kg of water pressure, it seemed unlikely that any living creature could survive in such an extreme habitat. And at first, when I looked at the live footage from the ROV camera, the landscape appeared quite barren. It appeared nothing like the vivid shallow-water coral reef ecosystem I was used to, teeming with life in every square inch. These deep-sea creatures should be comparatively far and few between. But As the ROV pilots expertly flew SuBastian up a seamount, I began to see different ecosystems with other kinds of life, such as fragile-looking corals reaching up into the water column to maximize their feeding potential. And on those corals, I saw ravenous coral predators like sea stars, also maximizing their food availability. Nutrients are clearly scarce in the deep sea, and so the organisms must take advantage of what is available. Even the creepy sea spiders–which make you question whether you’re watching the live ROV footage or the sci-fi classic Alien–find nutrients somehow.

Bringing these creatures back to the ship is an amazing feat: with a 3.5-ton machine donning robotic claws, the ROV pilots carefully collect samples with better dexterity than I have with my own two hands. If the ROV pilots entered a video gaming contest, I am sure they would win. Once the samples are secured in various containers on the ROV, the ROV ascends, and the lab work begins. We have to work quickly since the invertebrates come from frigid 2℃ water and the air temperature is definitely not 2℃ here at the ocean’s surface in the equatorial Pacific. After transferring the samples into an ice bath, my job in the lab is to photograph the specimens before passing them off to the scientists. I get to examine the detailed organisms one at a time, planning out my artwork as I go.

With so much happening on this 82m vessel, sometimes it is hard to find time to work on my art. When I am not helping the science team in the lab, watching the ROV footage, or coloring styrofoam cups, I am eating delicious food. I am not sure how the chefs have managed to keep the bananas from turning brown two weeks into a cruise. They must be growing a banana tree somewhere on the boat.

But I have managed to work on a few collages so far. I first began on a collage of a fragile primnoid coral adorned with spiny brittle stars, then started a collage of a chyrostylid crab, then one of a sea star munching on a bamboo coral, then a bright yellow stalked crinoid. I might be getting too much inspiration from this expedition, and I think I need to stop watching the ROV footage, or else I will end up doing hundreds of collages! Luckily I did not bring enough canvases to fit all my ideas. I have finished two of my collages and plan to start on more this week after we traverse the Titov seamount, our last stop within the PRIMNM. Stay tuned for more collages of corals, coral associates, and other deep sea creatures! 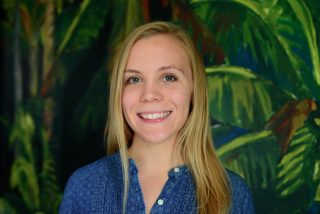