It is likely most of you have never heard the word “corallivory,” and fair enough – it is not in the mainstream. But arguably, it should be! You may be familiar with the word “herbivory,” for example. Corallivory as a concept is similar and simply put, is the consumption of living corals by predators. See how it just rolls off the tongue?

Many moons ago, I did my doctoral work on shallow-water corallivores. Specifically, I focused on shallow-water coral reefs, examining the patterns of parrotfish predation on live corals, and whether/how corals could heal and respond. 15 years later, corallivory is a growing field, and we now know that there are over 200 species of animals that eat shallow water corals worldwide. These marine predator-prey interactions are interesting because – like plants – corals cannot run away from danger. After years of study, we have determined that similarly to plants, shallow water corals either a) succumb and are eaten b) tolerate partial predation or c) defend themselves physically or chemically from predators. Of these, option “a” is the least desirable outcome and the coral dies. Options “b” and “c” are more viable but require substantial energetic resources – i.e. food – which is scarce in the Deep Sea. By contrast, energy is plentiful in shallow-water ecosystems, even in nutrient-poor waters.

Shallow-water corals have a tight-knit relationship with sun-loving symbiotic algae that fix carbon with solar energy and pass it onto the corals. The deep sea utterly lacks sunlight, so energy cannot be derived the same way. Instead, energy is indirectly gathered from organisms near the surface who eventually defecate, die, and drift down to the deep sea where slow-growing, slow-moving deepwater corals and sponges catch them in the current. Deep-sea corals seriously deserve some credit for their survival from crunching by corallivores!

Corallivory should now roll off the tongue, and maybe instill a sense of dread. Being slowly eaten by a sea star with an inside-out stomach is pretty terrifying, as is having the juice sucked out of your polyps by a sea spider (kind of like a Dementor straight out of Harry Potter). I hope you gain some respect for the deep-sea corals that survived for hundreds of years despite these horrific and constant attacks. And being to wonder, as I do, how the ecology of all of this works? Stay tuned. And until then, trust me, don’t underestimate the corallivores…. Or the corals. 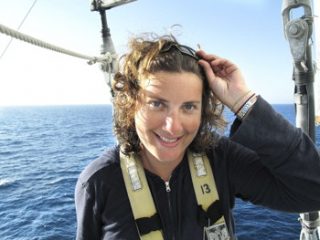