Yesterday, research vessel Falkor arrived in Broome, North Western Australia under clear skies and calm seas. Despite the nice weather, mobilizing for this cruise was anything but easy. When dealing with king tides of up to 10 meters, docking a 272 ft. vessel and loading equipment can be challenging. The science team and crew had only five hours to load all the equipment that they will need for the next two weeks. Luckily, Falkor was greeted by a helpful gangway team to get the job done.

Putting the “Coordinated” in Robotics

Falkor is now officially on its way, transiting from the port in Broome towards the Timor Sea. You can feel the buzz circling the ship as everyone prepares for the “Coordinated Robotics” cruise. Many voyages on Falkor seek specific data to answer questions about the ocean, however, this cruise is different. The science party will be examining methods of gathering data more than the data itself. This is important, as ship time to examine new data gathering techniques is very rare. By improving tools and the way scientists use them, the team will help to advance techniques to improve the amount and quality of data obtained.  Essentially, the science team will be looking at the way multiple mechanical tools can work together. These instruments will be synchronized to work at the same time, in a team-like manner. And just as the robotics will be working as a team, so will the scientists. Chief scientist Oscar Pizarro and his international team, will bring together a highly regarded group of scientists from all over the world who have significant experience in marine robotics field operations. 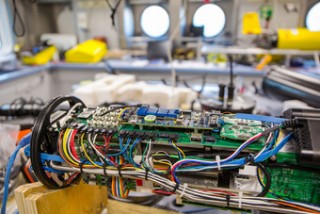 In order to perform this coordinated research, the team will depend on a large quiver of tools. There are several different autonomous underwater vehicles (AUVs), gliders, Lagrangian floats, and autonomous surface vessels (ASVs); really a cornucopia of robotic instruments that will be the eyes, ears, and hands of the scientists. The AUVs will take photos and collect water measurements at various depths, the floats will measures ocean currents and other parameters like temperature or salinity, and the ASVs and gliders will collect data as they rise and fall with wave action.

The engineers will study and practice ways of getting the robots to work collectively. This information could include mapping and relevant local oceanography, as well as seafloor structure, chemical, and biological discoveries. The team will be asking two main questions during their time at sea:

One hope is that this type of research will eventually lead to teams of robotics working on long-term projects without consistent or nearby oversight. Having the ability to manage groups of robotic vehicles over large distances could exponentially increase data collections and observations for scientists working in ocean exploration while cutting costs.

Stay tuned, and follow the blogs to come, as we delve deeper into the everyday operations, development of tools, profiles of the robotics, as well as daily discoveries. We hope you join us as we investigate these new approaches and the exciting potential of coordinated robotics.

The Lagrangian Float: A Profile

The Many Challenges of Underwater Communication

Beauty Of The Journey