The days are sailing by as the crew and science team aboard Falkor continue to work together to map the more northwestern seamounts of the Hawaiian chain. Our present mapping location, Laysan Island, is an area steeped in history.

Because of the island’s location near prime whaling waters east of Japan, there was frequent commercial traffic through the area in the nineteenth century that brought commercialism to the island. The damaging effects of guano mining, bird feather harvesting, and invasive species introduction decimated the delicate ecosystem including driving three indigenous bird species (the Laysan Rail, Laysan Honeycreeper, and Laysan Millerbird) to extinction.

However, public outcry and the 1909 creation of the Hawaiian Island Bird Reservation by Theodore Roosevelt launched one of the most successful Pacific Island restoration efforts by the U.S. Fish and Wildlife Service. Laysan now enjoys an invasive species free landscape where some native birds and plants are recovering to their pre-exploration levels.

Previous blogs have explained the details of the gravimeter, magnetometer, multibeam sonars, and most recently, the process of multibeam bathymetric mapping and data editing. There is one more type of data that we are acquiring, which provides a wealth of supplementary information on the seafloor without the addition of another scientific instrument. This data is called multibeam backscatter and comes from the received signals of the multibeam sonar in an unconventional way.

Foremost, the multibeam sonar uses the time it takes for acoustic signals to travel from the ship to the seafloor and back to calculate the depth. However, the sonar also records the intensity of the returning acoustic signal, e.g. how much of the initial “ping signal” was reflected off the seafloor to return to the ship. This provides information on the type of substrate the acoustic signals are reflecting from.

For example, a hard platform such as a submerged carbonate reef or lava flow field will reflect back a lot of the signal while a mud and sediment covered pelagic flat will absorb more of the acoustic signal and thus reflect back less. This intensity signal creates a map of the substrate that is complimentary to the bathymetric maps.

The two types of maps created by the multibeam sonar, bathymetry and backscatter, provide a very robust way to examine and interpret the features we observe on the seafloor. For instance, the relative age of features including slumps, landslides, and volcanic cones can be gauged by estimating how thick the sediment is on each feature on the backscatter map. As can be seen in the map of a slope of Laysan Platform, chutes where small landslides frequently flow have harder backscatter returns because the sediment is periodically removed by the landslide action. A low backscatter signature, indicative of thicker, undisturbed sediment cover, characterizes the areas to the sides of the chute.

Backscatter and bathymetric maps may be used separately or the backscatter imagery may be draped over the bathymetric digital elevation map to create a single image of depth and hardness of the substrate (shown above in the maps of Laysan Platform). You may notice that high backscatter areas are also frequently areas with steep slopes. This is because significant amounts of sediment cannot accumulate at high angles because such a deposit would be unstable. 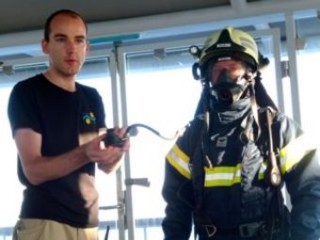 And finally, while busy with important mapping activities, it is always important to take some time out for safety. Allan Doyle (Second officer) demonstrated the Falkor fire equipment on Deck Cadet Luke MacNutt to train all the scientists on board. Afterwards, everyone got to try on the gear. 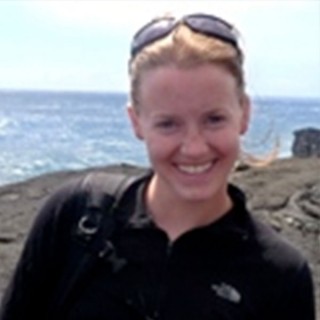