Well, we just left the monument a few hours ago and are headed home, due in the Port of Honolulu at 8 a.m. tomorrow.

Between the two expeditions, many of us have spent 10 weeks aboard Falkormapping the Papahanaumokuakea Marine National Monument. As we make our way back, Nicky Wright is already on the upper deck looking out for land (see photo), while Lars Toensfeldt tries to get seabird droppings off the mast camera. Great weather, great equipment, a great crew, and a great science team resulted in a great cruise. 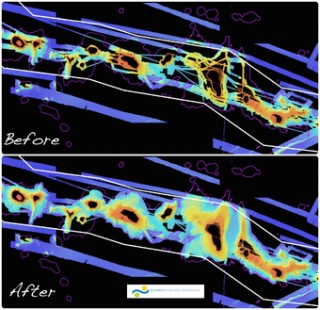 The top map to the right shows what the central part of the monument looked like before we arrived.  These past data were painstakingly obtained over many years, primarily by scientists from the University of Hawaii and NOAA’s Pacific Islands Fisheries Science Center Benthic Habitat mapping group.

The bottom half shows the transformation in our seafloor view of the region now that we have finished our work.  Every major bank and feature from Lisianski Island down to the northern rift zone off St. Rogatien bank is now completely mapped from a depth of 150 meters out to its deep, rocky base.

With these two successful cruises, SOI can proudly join the institutions that have taken the time and effort to help reveal the fascinating nature of the seafloor in the monument.

Here are a few examples of the findings we’ve made on this cruise but hadn’t yet mentioned in our blogs:

1) There’s a really deep, narrow channel between Lisianski Island and Pioneer Bank where some apparent turbulence wreaked havoc with our sound velocity profiles.

2) A major landslide appears to have taken off the east side of the huge rift zone ridge extending south from Pioneer bank, creating a razor sharp ridgeline.

3) Thanks to drowned coral terraces and landslides, a bizarrely shaped Maro Reef has taken on the shape of a running pig, or pua’a in Hawaiian.  The head is on the western side looking away while the crater on the eastern side forms its tail.

We’re all tired but satisfied that we have done something special.  Thanks to everyone for making this happen and aloha from Hawaii.