The time that I spent on R/V Falkor was filled with first experiences: sleeping on a ship, watching sonar mapping take place in real time, dancing in a dark garage, being seasick, and finding a way to do a site-specific performance in a venue that I never imagined.

Data and Design
After finding my sea legs, I was able to see firsthand how science is conducted on R/V Falkor. While I had been in a few university science research labs, conducting experiments on dry land as opposed to working on a moving ship requires a perspective of continuous motion. Subtle details of daily life doing research on a ship requires thinking about, such as how and where you put down your pen to avoid having to scramble on all fours looking for it when an eventual wave rocks the boat a little more than usual. The motion of the ship is something that the scientists who set up the sonar mapping equipment were thinking about as they designed a gondola that would limit the ability of the bubbles created by the wake of the ship interfering with the data being received from the seafloor.

I was really thinking about this idea of perpetual motion while looking at the mapping data as it was being collected of the Cascadia Margin region of the Pacific. By taking screen captures of some of the mapping data coming in, as well as some 3D data that chief scientist Susan Merle had gathered on a previous expedition of this region, I was able to utilize this as imagery in my work.

Building Blocks
In various degrees, I have been working with LEDs as a performative visualization tool for the past decade. This started out as a way to translate tweets into the “ones and zeros” of binary code via blinks of light across 8 LEDs to spell out the letters in tweets. I used the light photographically to create abstract Twitter portraits in a series I called Status Symbols. Since I started that project in 2010, LED technology has advanced a huge deal from where it once was. There has always been a desire to use the LEDs to visualize photographs – it just took the hardware time to catch up!

In the past two years, I have worked to create a system of wearable LEDs run by a raspberryPi computer the size of a credit card, that fits into a belt pack with a battery. I am able to load up the LEDs with graphics, photographs, text, and (hopefully sometime soon) a livestream of data. It works so that as I move through space, the LEDs play back one column of pixels. As I do this, I have a projector that is able to freeze my movements as a real-time projection behind me. Aboard Falkor, I was stationed in the garage, as I needed a dark space to literally run around in front of my technology set-up. Using some of the screen captures from the Cascadia Margin mapping, still photographs were created from long exposures of my movement.

Staging for the Crew
But I also wanted to do something live for those onboard. I did not realize at first that I would have most areas of the ship as an option. We settled on the aft deck as the performance location, projecting onto the garage as the ship continued capturing mapping data. At dusk, on a cloudy evening, I put myself into perpetual motion and drew with light using the mapping data that was being collected as sound. It was a very surreal experience to use the deck to perform on as the sea rolled by on three sides of me. I was able to capture some 360 videos of it before inviting the other artists out to see the performance as the evening grew darker. It will be quite some time before a site as unique as the Falkor comes my way to perform on.
Check out a quick video showing Lori Performing on R/V Falkor below: 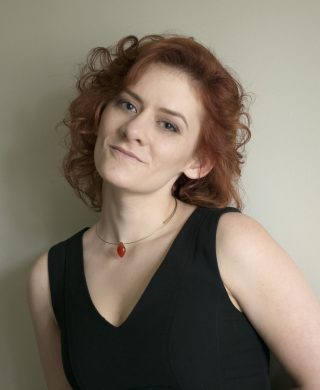 Dancing with Light, Space, and Time

Inspired by the Sea

Awash in the Waves

Portholes To My Thoughts

Hidden Beneath the Surface

The World’s Oldest Camera: The Sun