Walk into the Wet Lab aboard R/V Falkor and you will find us, the biological team, juggling liter bottles, vials, tubes, and jars—all containing ocean water from our current location. It has been two weeks since we arrived at the Subtropical Front in the middle of the Pacific, and every day we filter liters of water to trap invisible microbial communities.

More numerous than the stars in the universe (and so tiny that millions can fit into the eye of a needle), marine microbes are the invisible “driving engines” of the ocean. These microorganisms—namely bacteria, archaea, and protists—are microscopic factories responsible for 98 percent of ocean primary production. While we know they serve a vital function for our planet, it is difficult to find out more details about them. How many species are in the oceans? What are they doing?

While the technology on R/V Falkor provides us with measurements for salinity, temperature, and pigment maps across the front, the biogeochemists and biologists on our team are collecting samples based on these maps to refine the distribution of chemicals and biological diversity here.

After collecting the water samples using Niskin bottles, we concentrate the microbial cells higher than 0.2 microns (one micron is 1,000 times smaller than a millimeter) on special sterivex filters, and store at -80 degrees Celsius to keep the cells intact. We will transport these samples back to our lab in Porto where they will be ready to analyze for microbial diversity and functions based on environmental DNA (eDNA). DNA contains the genetic code of all living organisms and can be described as the “blueprint” of life. The biggest game-changer is Next Generation Sequencing (NGS) technology allows us to “read” the DNA from a whole microbial community without the need to grow them in pure culture first.

More Than Identification
However, our objective is not just to differentiate the groups of microbes. We also want to figure out the role they play in this ecosystem and how they respond to the physical and biogeochemical forces that characterize ocean fronts. Through our sampling, we can differentiate layers of biological diversity at various depths, as well as spatially (horizontally). In this way, it is not so much a two-dimensional picture, but more like a four-dimensional model.

We collect samples from four different depths: five meters, 100 meters, 150-200 meters, and 500 meters. The 100-meter depth is the chlorophyll max—where the sun still reaches. Photosynthetic organisms have the maximum abundance here. You may think that the most activity would occur at the surface, but there is actually too much sun for them to operate properly in terms of photosynthetic mechanisms: this is called photo inhibition. At deeper depths, we are looking at non-photosynthetic organisms—bacteria, archaea, and other eukaryotes.

Chemical Symbols
We are also studying chemical properties of the ocean, specifically how nutrients get distributed across a front. To do that, we are measuring three forms of nitrogen (ammonium, nitrate, and nitrite) as well as silicate and phosphate. In the wet lab, we have a sensor connected directly to the water flow that measures nitrate, which allows us to get real-time data.

The main reason for doing biological sampling is to figure out how all the physical changes occurring at the front will influence the distribution of marine life—both at depth and at the surface. The availability of nutrients depends on the currents, and, on the other end, the organisms follow the nutrients. It is a cascade of events where the physical drives the chemical which drives the biological. 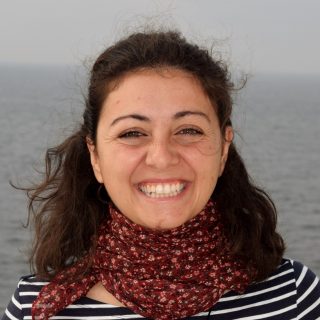 Gearing Up For the Future ~ Video Update