Over a decade ago, we established 19 long-term study sites in four different vent fields here on the Eastern Lau Spreading Center. We placed small, floating markers on each of these sites in the hope that one day we would return to see how they had (or had not) changed.

And now, here I am again, floating over our long-term study sites and preparing to launch the remotely operated vehicle (ROV) to visit one of my favorite environments on the planet: an active hydrothermal vent field.

I had the pleasure of leading three previous expeditions here to work on the biology of the animals and the ecology of the vent communities in 2005, 2006, and in 2009. On those expeditions, we developed many of the techniques that we have improved on for use this year, and made discoveries that led us to new questions and whetted our appetite to learn more about this unique ecosystem. We wrote proposals to both Schmidt Ocean Institute and the US National Science Foundation to support revisiting these sites to study natural succession in these ecosystems, as well as detailed experiments with some of the more amazing of the local animals.

Of course, that is all history now – NSF funded the grant proposal and Schmidt Ocean Institute awarded us the ship time. The long months of preparation, planning, and fabrication of equipment is done. Our team has already spent two weeks at sea (see previous blogs), and the work was well underway by the time I arrived in Tonga to relieve Dr Peter Girguis as chief scientist, for the second leg of this research expedition.

Although I missed being on board for the first exciting dives to sites that we had not seen since 2009, I watched and read the cruise blogs from shore and could share in the excitement when the first markers were spotted and the team began the work to quantify the changes in the communities. And, it is a pleasure to join a cruise after most bugs have been worked out and the scientists have already gelled into a productive and interactive team. I am joining an amazing team of scientists already on board. Just catching up with all of the scientists on board, and hearing about the preliminary findings from the last two weeks was invigorating. Many of them were with us in 2009 and in fact, two of the PhD scientists on board now were graduate students in 2009. These seasoned scientists and I are also lucky to have an amazing new group of graduate students, technicians, and post docs on board, whose enthusiasm and constant questions will point us in new directions and carry this research into its next generation.

As I finish this up, I am looking at the video screens in the ships library and I see that the first dive of this second leg is beginning. I can see that the ROV is now being lifted up in the air off the deck and about to be lowered into the water for the descent to the ocean floor. After the first splash in to the water, it will take the ROV about 90 minutes to reach the sea floor and this time, I’ll be in the ROV control van to say hi to my “old friends” on the sea floor and examine in detail the changes in our study sites since our last visit in 2009. 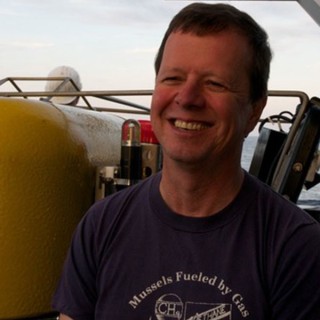