“Build me straight, O worthy Master!
Stanch and strong, a goodly vessel,
That shall laugh at all disaster,
And with wave and whirlwind wrestle!”

On the morning of the 19th, the R/V Falkor entered harbor in the country of Tonga after nearly 12 days at sea. As we stood on the deck watching the dockworkers heave lines to and fro, several scientists breathed a sigh of relief, for we had spent a number of days being tossed around by the sea. It was by no means a severe beating, and the R/V Falkor is known for her ability to move swiftly and steadily through waves and swells. Still, if one is susceptible to seasickness, being in harbor or on land is a pleasant respite.

Yet for all of the anticipation that came from entering port, there remained a palpable excitement about the accomplishments of the previous week. Despite losing about half our dive days due to 3 meter seas (~10 foot seas) and 25 knot winds (~ 28 MPH winds), we were eventually able to make three dives with the remotely operated vehicle (ROV) ROPOS. This remarkable robotic submarine allowed us to take incredibly high-resolution photographs of the animals and microbes that inhabit these vents. In addition, we deployed a unique stereo camera system that allows us to “see” the animals in 3-D, much like the 3-D technology used in feature films. We also used a device called a multibeam sonar to make acoustic “maps” of the seafloor and the animal communities (you can read more about these technologies in previous posts). To provide additional environmental context for these images, we used several geochemical sensors to measure the concentration of dissolved gases in the vent water. On top of all the work we did on the seafloor (or “in situ”), we collected a myriad of animals for scientists who were doing experiments and studies on the ship. The animals ranged from giant snails to miniature tubeworms, and our team of scientists was learning about how these animals make a living in their habitats. All in all, we were pleased with what the ROV ROPOS and its team could accomplish in a short while, which helped us make best use of the limited time we had on the seafloor.

Now several of us scientists, myself included, are heading home. Before we disembarked, we met up with the onboarding scientists to discuss our previous leg. After several hours of debriefing, all the scientists and crew enjoyed a traditional Tongan dinner on board the R/V Falkor. The next morning, the onboarding scientists settled into their cabins on board ship, while those of us who were leaving said our farewells. Going home is always a time of many emotions. As we waved goodbye to our home for the last two weeks, it was easy to forget the rough seas and technical challenges that are “par for the course” in oceanography. Rather, we remembered how the ship and ROV took us places rarely seen by human eyes, and helped us further our understanding of these enigmatic ecosystems. 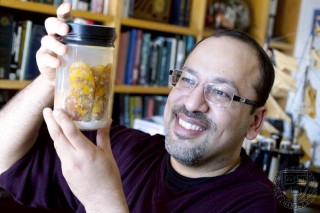