Around two-thirds of the Earth’s surface lies beneath the oceans, and much of what lies at the depths of the oceans is made of basaltic oceanic crust. The ocean basins are perpetually ‘recycled’ over geologic time, with the creation of new lithosphere at mid-ocean ridges and the destruction of old oceanic lithosphere in trenches occurring simultaneously. Though hidden beneath the water masses of the global ocean, the oceanic lithosphere hosts some of the most prominent topographic features on Earth’s surface—many of which remain uncharted. Mapping the world’s oceans is the last frontier and requires us to explore beyond what we see at its surface.

On voyage FK201228 “Pinging in the New Year”, we are a team of on-board scientists and students working collaboratively with the ship’s expert marine technicians and crew, as well as a team of onshore collaborators from Oceania to survey the seafloor in the northern Tasman Sea as part of the Seabed 2030 project. Because only limited marine geophysical data are available from this region, more data are needed to piece together its tectonic evolution.

My name is Dr Derya Gürer. I am a geologist with a passion for the ocean and an interest in the formation, evolution, and destruction of the Earth’s oceanic lithosphere. As on-board Co-PI, I will be supporting the broad-scale, deep-water mapping effort and leading the acquisition of shipboard marine magnetic data needed to improve our understanding of the geologic history of this complex region.

The Tasman Sea is a deep ocean basin that borders the eastern Australian margin, with an area equal to the size of one-third of the US. The oceanic crust that underlies the Tasman Sea formed when Australia and Zealandia plates separated during the break-up and dispersal of the supercontinent Gondwana. This break-up resulted in the fragmentation of continental blocks (such as Lord Howe Rise) that were once part of the Australian continent and are now found as micro-continents spread across the Southwest Pacific region.

When geologists reconstruct the past motions of tectonic plates, they use marine geophysical data (including magnetic data) preserved by the ocean floor. As the basaltic rocks that erupted along mid-ocean ridges during seafloor spreading cool, they record the Earth’s magnetic field at the time of formation. Because the Earth’s magnetic field flips over geological time, it forms symmetrical magnetic stripes (magnetic reversals) on both sides of a mid-ocean ridge: a ‘barcode of the oceans.’ In fact, the observation of marine magnetic reversals was instrumental in proving the theory of plate tectonics. Together with the orientation of tectonic features (such as fracture zones) and seamount tracks, the magnetic patterns can be used to reconstruct ancient plate motions – like a Google Earth deep time machine – where you can drag the time slider millions of years into the past.

The opening of the Tasman Sea basin through seafloor spreading took place along a mid-ocean ridge (now extinct) that was producing oceanic crust between Late Cretaceous to Eocene times (~84-52 million years ago). The mid-ocean ridge propagated like a zipper from south to north, and as a result, the Tasman Sea basin is wider in the south, between Tasmania and New Zealand than in the north between offshore Queensland and Lord Howe Rise. The opening of the Tasman Sea basin was not smooth, but happened in multiple stages, and sometimes the zipper got stuck (as the mid-ocean ridge jumped). A detailed tectonic reconstruction of this region based on prominent seafloor features and magnetic anomalies suggests that there were at least 13 pieces of a puzzle that were involved in the construction of the Tasman Sea and the dispersal of micro-continents into the southwest Pacific. 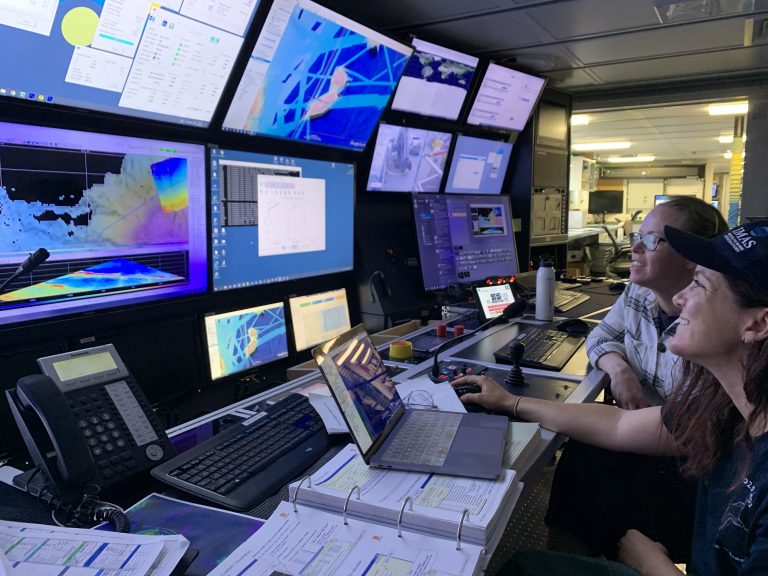 In the northern part of the Tasman Sea, a period of volcanism ~35 to 25 million years ago gave rise to a chain of seamounts, which partly obliterated the magnetic lineations of the seafloor. The exact timing of Tasman Sea opening and the ending of seafloor-spreading requires higher resolution mapping of the seafloor and collection of marine magnetic data. Some of these new data will be collected in the northern Tasman Sea during the 30-day expedition of R/V Falkor. More bathymetric maps of the Tasman Sea are needed, as the seafloor fabric holds crucial information about the tectonic movement and the formation and evolution of the Australian continent.