The steam back to Guam is bumpy and never-ending. I might be a little seasick, or the hectic pace of the cruise and pre-cruise preparations may have caught up to me. Maybe I’m just tired. It’s certainly been a long 6 days, but well worth it. There were some trials, but I will return to Guam with priceless data.

Many of us have been keeping unusual hours, trying to make the most of precious ship time. I’ve stayed up all night twice on this short cruise. Then last night it seemed reasonable to convene a 4 a.m. meeting to weigh the weather conditions against the data that might be collected from another deployment.

I hadn’t planned on attending it, but I woke up. At the meeting, the captain and chief scientist decided the weather had won and we should head to another position that might have a milder sea state. I tried to go back to bed, but it was daytime back in North America, and most of the ship was asleep. That meant more bandwidth on the satellite connection, so I fired a few emails off to colleagues and friends, including this one: Subject: Glass sphere implosion in the Mariana Trench!

It’s only been a few days, but the frustration and grief of losing Deep Sound III—an audio profiler designed to descend to 10,900 meters (35,761 feet) in the Challenger Deep and collect ambient noise recordings—has mostly turned to morbid curiosity. Did the main instrument housing, a glass sphere, fail? Or was it one of the six ceramic spheres that gave it additional buoyancy? They are, after all, the same type of sphere suspected of causing another deep sea homicide: The HROV Nereus. But the lander was previously pressure tested and had already made a successful dive to 8.5 km in the Tonga Trench.

For a minute, the whole of the Challenger Deep rings like a cathedral

Thankfully, an earlier sister instrument, Deep Sound II, had been deployed soon after Deep Sound III made its fateful descent, and it was able to capture a very clean and clear recording of the implosion. I say thankfully, because I think we can learn quite a bit from this minute or so of audio.

The shock wave should tell us something about the nature of the initial failure, which will be helpful. But the echoes of that implosion also reveal the geological and bathymetric properties of the trench. Not to mention, the reverberation is just plain beautiful to hear. For a minute, the whole of the Challenger Deep rings like a cathedral.

For now, I can only write about it informally, but maybe if I put the work in, I can write up a scientific paper about this amazing, if catastrophic, equipment failure, as well as the unexpected audio experiment it made possible. We might just be able to use this sounding to learn something new about the Mariana Trench, ocean acoustics, and ocean engineering.

As I write this, my laptop churns away in the background processing the huge amount of ambient noise data collected by Deep Sound II during its two successful deployments down to 9,000 meters (29,500 feet). The data look really interesting—just predictable enough to make sense and null any worry of equipment misbehavior, but with enough anomalies and curiosities to convince me there will be a great payoff.

Ultimately I’ll have to work through 16 hours of noise recordings, but I’ll get to ask and hopefully answer some very exciting questions: Can we hear any hadal-dwelling animals? Can we hear the shifting of the Earth’s plates in the seismically active region? Can we interpret the noise to learn something about the oceanography of the area?

I’m exhausted and possibly sick, and the swell is keeping me from doing anything productive. But, I’m in a great mood, full of excitement for what is to come. Our acoustic exploration of the Mariana Trench is a success, and over the weeks and months ahead, I have the privilege of exploring the data, and possibly discovering something new about this most remote piece of the world. 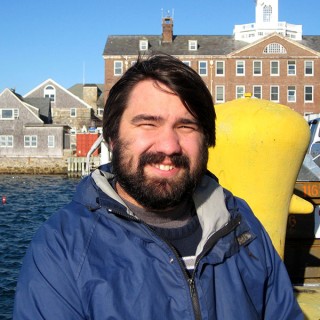