The Challenger Deep is the Mount Everest of deep-sea habitats. At nearly 11,000 meters down (almost 36,000 feet), it is the deepest seafloor crevice anywhere on Earth, and we’re on our way there. It’s an alien-like world where we know life exists, we just don’t know quite how it exists. But within a week we’ll know much more.

This cruise is the second expedition to an ultradeep trench environment supported by the Schmidt Ocean Institute, following as it does on the heels of the recent trip to the Sirena Deep led by Jeff Drazen and Patricia Fryer.

During our relatively short, 6-day cruise we will conduct operations in both the Challenger Deep and in the Sirena Deep. At only the length of a few football fields shallower than Challenger, Sirena may be the world’s second deepest spot.

We’re particularly interested in Sirena because this environment has shown evidence of serpentinization—a water-rock reaction that leads to the production of hydrogen and subsequent chemical reactions that can provide energy for use by microbes and animals with specialized, internal symbiotic microbes.

Both of our targeted ultradeep sites are found in the gigantic Mariana Trench system. Much of it lies in the United States’ Mariana Trench Marine National Monument, with the remainder, including the Challenger Deep portion, in the Federated States of Micronesia’s territorial waters. We will first travel 230 miles southwest from Guam to work at the Challenger Deep, then move on to the Sirena Deep, about 90 miles south of Guam, before returning to port.

What We’re Getting Into

The Mariana Trench is where the oldest parts of the Earth’s crust descend into its mantle to be recycled. The physical conditions of these deep habitats share more in common with the ocean below the surface of Jupiter’s moon Europa than the shallow marine waters of our planet.

The trench’s vertical scale surpasses every mountain chain, canyon or other feature anywhere on the earth’s surface. Most people don’t appreciate this as one of the planet’s greatest wonders, but if we could drain the oceans and see the trench’s terrain—unencumbered by miles of obscuring ocean—everybody would.

It is a significant risk to deploy any type of ocean instrumentation at the depths of the Challenger and Sirena Deeps, because pressures there reach nearly 16,000 pounds per square inch (1,100 bars). Implosion is a constant concern. Much of what can be deployed must be custom-designed by engineers skilled in extreme deep-ocean technology, a field more specialized than aerospace engineering.

The last time anyone went to the Challenger Deep was James Cameron in his Deepsea Challenger submersible, during the successful 2012 Deepsea Challenge Expedition (see the 3D movie out now!). Other private and government groups are developing full ocean depth manned submersibles, but those are likely years away from operations. Two unmanned remotely operated vehicles (ROVs) capable of operating at these depths have been built in the past, but both were lost. New ones are in development, but no vehicle in active use can currently work in the Challenger Deep.

We’ll be the first group to study Challenger Deep since Cameron’s brief visit. The only current option for working at such depths are the free-falling/ascending instrument systems generally referred to as landers or free vehicles. These have proven themselves to be indispensable for science operations in ultradeep marine locations.

During this cruise, we will be deploying landers to measure sound—including perhaps that made by trench organisms; to film the environment; to collect seawater, animals and sediments; to investigate the pressure adaptations of the deepest living microbial residents; and to obtain a variety of addition physical and chemical measurements.

We will have much to report. So, over the coming days, please follow our blogs for a chance to get to know some of the science, scientists and crew associated with this great deep adventure. 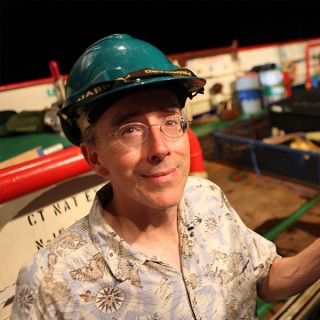