In our daily lives we often take maps for granted. Thanks to modern technology, maps are literally available at our fingertips, allowing us to plan our travel, map elevation profiles along our running or cycling routes, and reveal the shape of the landscape. For the oceans, however, maps are not as readily available. Only 25 percent of Australia’s ocean floor is mapped in enough detail to see the physical features on the seabed. We need this detail to interpret the current and past processes that have formed these features and to understand the types and diversity of habitats on the seafloor.

Remapping the Canyons
On this voyage, a team of skilled marine technicians have been busy remapping the Cape Range Canyon each night, while most of the science team has been asleep. While maps did exist previously for this canyon, the new map provides a far more detailed view of the canyon environment as revealed by the beautiful image below. The new map reveals a steep wall on the southern side of the canyon, and a more gradual slope with steps along the northern side. These features provide clues regarding the formation of this canyon.

The northern side of the canyon has a scalloped pattern to it, with small steps or terraces forming a gradual incline. These patterns indicate that the canyon has broadened gradually over time by sediment wasting away (or slumping) along the edges. The southern wall, by contrast, is steep, with slope angles of up to 30-50°. The steepness of this wall indicates that it has been eroded with a strong current, likely laden with sediment in what is termed a turbidity current. Turbidity currents were likely more active during past geological intervals when the sea level was much lower than today, exposing large parts of the seabed along the coast as dry land. Rivers or migrating dunes along this expanded coastal zone could have fed sand and gravel into the canyons, causing active cutting. Today, sediment at depths above the canyon, on the continental shelf, can be mobilised by large storms or perhaps earthquakes, sending sand and gravel down the slope and into the canyons.

A Story Written in Rock
The rock types vary through this canyon. The ROV images indicate that the shallower parts of the canyon, and parts of the deeper water portions, consist of blocks or walls of limestone, while volcanic rocks have been observed in the deeper parts of the canyon. Previous rocks collected in the canyon during a 2007 Geoscience Australia voyage on the RV Sonne indicate the occurrence of sandstone, siltstone, claystone, limestone and volcanics, including rhyolite and dacite. The sedimentary rocks were likely formed during deposition in a shallow marine environment during the Early Jurassic to Early Cretaceous as the western margin of Australia was rifting from Greater India ~140 million years ago. During this continental breakup, extensive thick volcanic deposits also formed along the western margin.

These walls of rocks now form important – though patchy – habitat for organisms on the seafloor. Mapping and imaging the Cape Range Canyon helps us to understand the past processes that have shaped these canyons, and the modern processes that continue to control the flux of sediments and currents through the canyons. These processes and the different environments they form are important drivers of the biodiversity patterns that we have observed along this canyon. Our next steps following this voyage will be to continue to unravel these patterns to better understand the diversity and distribution of habitats within the Ningaloo canyons. 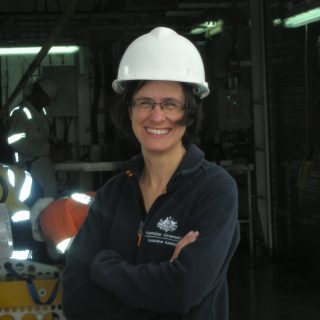