Boron isotope analysis is one of the studies that the experts onboard Research Vessel Falkor will be conducting during this expedition. In addition to calcium carbonate, corals such as cup corals and bamboo corals incorporate the element boron as borate ions into their skeletons. Boron has two isotopes, and analysis of the ratio of these isotopes in coral samples may enable the scientists to determine ocean pH, or acidity, over time. To understand how they will do this, a little chemistry review is in order, so take a breath, consider the oxygen entering your body – and away we go!

A Little Chemistry
Elements are composed of electrons, protons and neutrons. They are organized on the Periodic Table of Elements by the number of protons in their nucleus, known as their atomic number. Isotopes of elements are variants of an element where the number of neutrons in the nucleus varies and affects the element’s atomic weight. For example, carbon has three isotopes: C12, C13, and C14. When these elements are incorporated into skeletons of biological organisms, they can tell us about the chemical composition of the surrounding environment at the time they became part of the skeleton, since the ratio of the isotopes can change based on other chemical factors.

Using Isotope Ratio To Look Into the Past
In the marine environment, organisms with calcium carbonate skeletons incorporate isotopes of the element boron primarily in the form of borate ion. The ratio of these isotopes can be used as a proxy to determine changes in the pH or acidity of seawater over time. As the acidity of seawater changes, the isotopic ratio of boron in borate ion changes. Large-scale changes in the acidity of seawater have historically resulted from significant changes in atmospheric CO2, since increasing absorption of CO2 into seawater leads to increasing acidity. While the ice core records of atmospheric gas composition extend back 800,000 years, a much longer time series may be possible using boron isotopic analysis in the skeletons of marine organisms, such as foraminifera that can form layered deposits hundreds or even thousands of feet thick. Since the two primary isotopes of boron are not radioactive, there is no concern about decay, or change in the isotope composition over time like we see in radiocarbon. Once the skeleton has been laid down the record of boron isotope composition is “locked” in.

The famous White Cliffs of Dover are an example of one of these deposits of marine organisms. The cliffs are composed of deposited layers of tiny marine algae called coccoliths when Great Britain and much of Europe were under a vast sea 70 million years ago. Another example is from core samples taken in 1965 at Midway Atoll that represent 27 million years of coral growth atop the ancient volcano beneath. At the edge of the atoll the survey team had to drill through 400 meters of coral skeleton before they hit the basalt rock of the ancient volcano beneath. While boron isotopic analysis of these layers can provide a picture of ocean pH changes over time, the age of a given layer or sample can represent hundreds to thousands of years due to the extremely slow rate of sediment deposit, or in the case of coral growth, external factors such as stress or sunlight that affect growth rates. This information does not allow scientists the resolution they would need to observe acidity changes over shorter time scales, such as tens or hundreds of years.

Increasing the Resolution
When using the skeletons from living deep-sea corals, a much higher resolution record of pH changes can be observed since the age rings of the corals allow a given ring or sample to be mapped closer to a particular year. However, these analyses are complex and expensive. They require collection of the organisms from deep seamount habitats, sample cleaning and preparation, then analysis in a machine nearly as large as ROV SuBastian. The machine uses a very precise laser to vaporize parts of the sample and analyze the sample created for the boron isotopic composition. Imagine a disk of coral skeleton with age rings like a tree, and the laser taking a series of samples moving inwards toward the center of the skeleton, going back in time. Although not all deep-sea corals have observable growth rings, the skeletal growth rate is fairly consistent due to the relatively unchanging deep-sea environment. Using radiocarbon dating of the skeleton at the center of the disk – the time at which the coral started growing – and the date the sample was taken at the outside of the disk, we can determine the age of a “ring” sample by its location on the disk.

Using boron isotopic analysis, we may be able to determine changes in ocean pH at remote locations such as Necker Ridge where there have been little-to-no ocean chemistry measurements. Understanding how ocean pH has changed within the last hundred years – during the height of the industrial revolution – can provide valuable information on how human activities are affecting ocean chemistry and marine organisms. 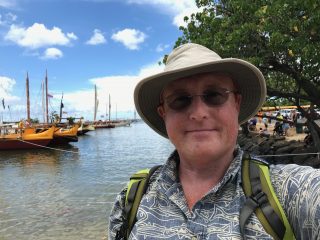