Three years ago, I started my PhD aimed at overcoming knowledge gaps pertaining to the taxonomy and the evolutionary history of black corals. Black corals consist of a proteinaceous black skeleton (hence their name) making them different than hard corals that are made of calcium carbonate. With the taxonomy and evolutionary history of this coral group being generally unknown, I first visited museums around the world to look at different black coral species. Three weeks and three countries later I had 100 black corals. However, museum samples can be broken and incomplete, which makes it hard to know if the species I am working on is what the species typically looks like when alive.

A year later, I joined RV Investigator to dredge rocks and corals in the Coral Sea. Three weeks and 55 dredges later I had collected about 150 corals. However, like museum specimens, dredged-up corals are knocked around and ground against rocks. When they reach the deck, the question remains: Is what I am seeing typical of the species?

Fast forward to now, on board RV Falkor. Another three weeks at sea; however, this time we have ROV SuBastian, a robust yet agile and precise robot showing us in 4K resolution what is living in deep and mesophotic habitats. Now I can collect corals to represent the biodiversity found in each dive site, and be sure that what arrives on the ship deck is exactly what each species looked like at depth. This provides me the opportunity to rewrite the taxonomy and evolutionary history of black corals, while having a very low impact on seabed biological communities.

This progression – from working with museum samples to dredge samples to ROV samples – is comparable to how technology has advanced, allowing scientists like me to make leaps forward in our research fields. And I for one am beyond thrilled to be doing this research on RV Falkor, that will provide myself and others years of material with which to work. It is truly an amazing time to be working in the field of taxonomy.

Less than a week into our three-week cruise, and I have already collected ~50 specimens representing four major coral and sponge groups, including seven genera of black corals that will answer long-standing questions about their evolutionary histories. For example, yesterday we collected a black coral from Herald Cays at 550 meters deep growing on a nautilus shell! But what is more exciting is the black coral belongs to a family called Schizopathidae; however, experts suspect the genus might belong to an entirely different family. With this complete specimen we can finally extract and sequence its DNA and compare it with species from both families, to see to which family it is most closely related.

With weeks of dives ahead, I expect to collect specimens representing new species and new records for the Coral Sea. Stay tuned to see what we find on our next dive! 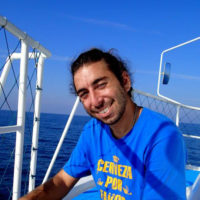